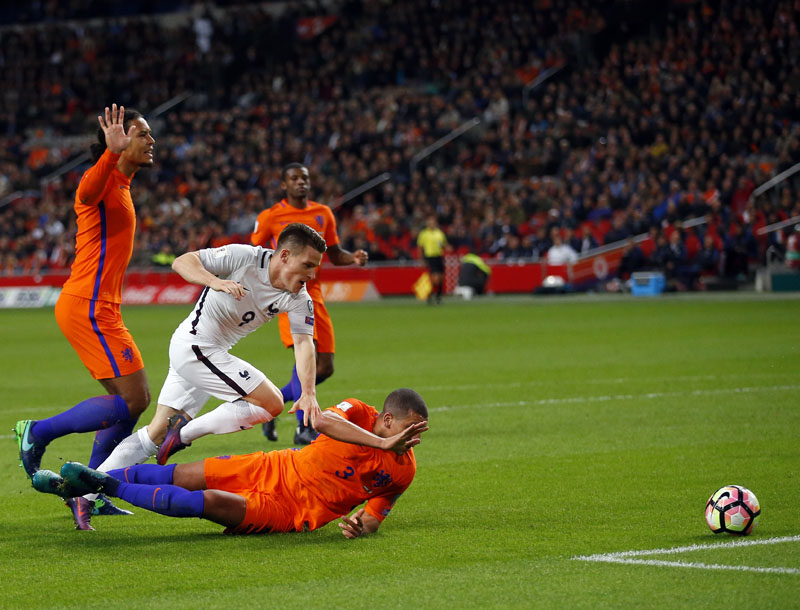 France's Kevin Gameiro (centre) falls after colliding with Netherlands' Jeffrey Bruma (right) during the World Cup Group A qualifying soccer match in the ArenA stadium in Amsterdam, Netherlands, on Monday, October 10, 2016. Photo: AP
GENEVA: The fastest goal in World Cup history capped a night of 6-0 routs and the Netherlands' further fall in European qualifying on Monday. Seven seconds ticked by when Belgium forward Christian Benteke's shot finished his surging run through the Gibraltar defense which kicked off but coughed up the ball. Benteke beat the 8.3 seconds that FIFA timed Davide Gaultieri taking to score for San Marino against England in 1993 and set the tone for the visiting Belgians' 6-0 win. Portugal also won 6-0 but needed only a single, excellent goal from Cristiano Ronaldo to dominate the Faeroe Islands. Instead, 20-year-old Andre Silva stepped up with a first-half hat-trick in just his fourth international match — perhaps finally pairing Ronaldo with a true penalty-area predator for the freshly crowned European champion. Dutch decline has been steep since it followed runner-up and third-place finishes at the last two World Cups with failure to qualify for an expanded Euro 2016. A 1-0 loss at home to France was the latest setback, sealed by Paul Pogba's powerful shot from 30 meters (yards) in the first half. Belgium and France top their groups, though Portugal trails Switzerland which won its third straight qualifier, 2-1 at lowly Andorra. Only the nine European group winners advance directly to play in Russia and four runners-up will qualify through a playoff round. Here is what happened on Monday: GROUP A France lived up to its billing as favorite in the group thanks to Pogba's goal and a late save by Hugo Lloris. Sweden continued to show it can play without retired superstar Zlatan Ibrahimovic, going level with France on seven points by beating Bulgaria 3-0. The Dutch have four points and, despite drawing 1-1 in Sweden last month, are already playing catch up. While Netherlands goalkeeper Maarten Stekelenburg looked like he could have kept out Pogba's goal, his second-half saves kept his team in the game. "Maarten knows that he would usually save that (Pogba shot) with one hand in training," Netherlands coach Danny Blind said. Injured Dutch stars Wesley Sneijder and Arjen Robben did not start and Quincy Promes limped off just 16 minutes in. France coach Didier Deschamps said Pogba was "decisive ... not just because of his goal, but also by winning the ball in midfield and distributing well." Also, Belarus took the lead in the 80th and Luxembourg equalized five minutes later in a 1-1 draw. GROUP B Portugal's second 6-0 win inside four days was not enough to top the group but points to a bright future. Andre Silva, the Porto prospect, scored in the 12th, 22nd and 37th minutes before Ronaldo added a fourth midway through the second half in a comfortable visit to the North Atlantic. Goals from Joao Moutinho and Joao Cancelo in stoppage time completed the drubbing. Silva has replaced Eder, the Euro 2016 final scorer against France, and looks there to stay, now with four goals in four games to complement Ronaldo's career tally of 66 for Portugal. Ronaldo's goal Monday was a rising left-foot shot from the edge of the penalty area. Switzerland was less impressive in edging to a 2-1 win over Andorra which had not scored in World Cup qualifying since September 2009. It was worth waiting for, after Fabian Schaer's 19th-minute penalty and Admir Mehmedi's 77th-minute header put the visitors in control. Then Alex Martinez fired in a shot from distance in the 90th. Switzerland has nine points, three points clear of Portugal. Hungary is third, with four points, after winning 2-0 in Latvia. GROUP H Belgium needed only a World Cup-record seven seconds to prove the gap between No. 2 in the FIFA rankings and Gibraltar, which is dead last. Two lazy backward passes into the game, Benteke stole the ball, cut through the defense and made history. Benteke scored two more, one a wonderful backheel, to lead Belgium to match its biggest away victory. The other scorers were Mertens, Eden Hazard and Axel Witsel against a team playing its first World Cup qualifying campaign after gaining FIFA membership in May. Belgium has a perfect nine points atop the group. Greece is the main challenger after it won 2-0 at Estonia to stay perfect through three matches. Also, Bosnia-Herzegovina beat Cyprus 2-0. It was further evidence that the Red Devils, a dispirited team after an earlier-than-expected quarterfinal exit from Euro 2016, have found their groove under new coach Roberto Martinez. "It is a terrific moment for Belgian football," Martinez said. "It showed the focus we had."
#World Cup #Kevin Gameiro #European Qualifying Roundup #European World Cup qualifying #The Netherlands vs France
You May Also like: