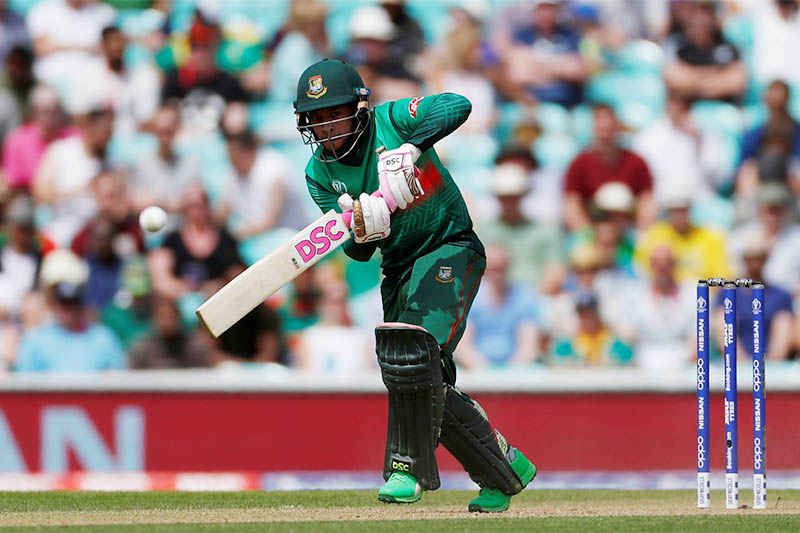 Bangladesh's Mushfiqur Rahim in action. Photo: Reuters
LONDON: Mushfiqur Rahim and Shakib Al Hasan put together a record partnership as Bangladesh reached 330 for six wickets to set South Africa a formidable victory target in their World Cup match on Sunday. The pair scored 142 runs for the third wicket to notch up Bangladesh's highest World Cup partnership. Bangladesh put on an aggressive batting display backed by enthusiastic support at The Oval to achieve their highest ODI score. Bangladesh dominated the bowling to reach 217-2 before Shakib was bowled for 75 by Imran Tahir in the 36th over while attempting a sweep shot to a full-pitched ball. Mushfiqur went for 78 not long after, caught on the boundary off Andile Phehlukwayo. But South Africa, who lost to England at the same venue in the tournament opener on Thursday, were unable to put the brakes on. Mahmudullah’s unbeaten 46 and 26 runs off 20 balls from Mosaddek Hossain put Bangladesh in a dominant position. South Africa’s gamble of putting Bangladesh into bat and hoping to bounce them out cheaply with their pace attack fell flat on a docile wicket, and was exacerbated by a hamstring injury to opening bowler Lungi Ngidi, who left the field after bowling just four overs.
#Mushfiqur Rahim #Shakib Al Hasan
You May Also like: