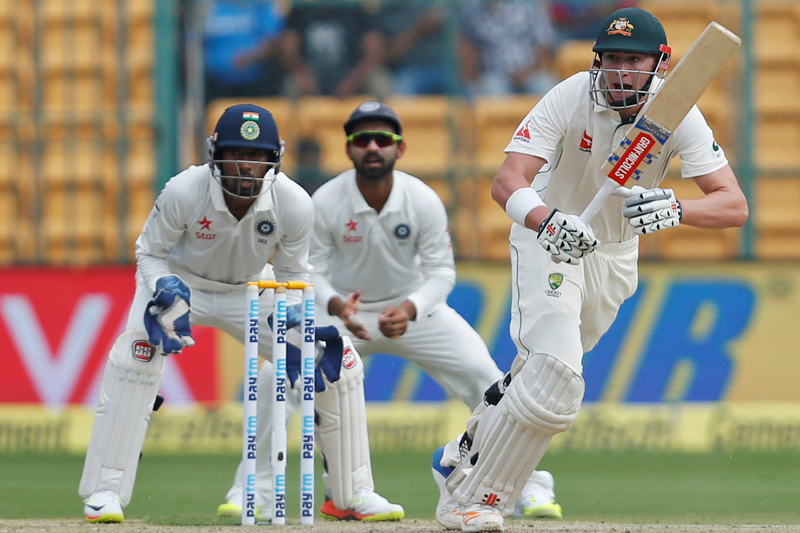 Australia's Matt Renshaw plays a shot. Photo: Reuters
BENGALURU: Opener Matt Renshaw struck his second fifty of the series as Australia made slow progress towards a first innings lead against India in the second test at the M. Chinnaswamy Stadium on Sunday. After resuming the second day on 40-0, the touring side were 163 for five at tea to remain 26 adrift of India, who were bundled out for 189 in their first innings on Saturday. READ ALSO Shaun Marsh was unbeaten on 38 after brother Mitchell was out leg before to paceman Ishant Sharma without scoring off the last ball before the break. The touring side, who lead the four-match series 1-0 after their 333-run win in the opening test at Pune, lost two wickets in an enthralling morning session against a rejuvenated India but recovered through a 52-run stand between Renshaw and Marsh. The left-handed Marsh has been handed one reprieve, however, when he edged paceman Umesh Yadev to wicketkeeper Wriddhiman Saha on 14 but India made the mistake of opting against a review of the umpire's not out verdict. Earlier, India depended heavily on off-spinner Ravichandran Ashwin to weave some magic after his Australian counterpart Nathan Lyon picked up eight wickets for 50 on the first day.

Australia's Matt Renshaw plays a shot. Photo: Reuters
The world's top-ranked spinner did provide the breakthrough, spinning one around David Warner's bat to hit his off-stump. The left-handed opener managed to add 10 runs to his overnight score before being dismissed for 33. The fall of Warner spurred the Indian side on as they came hard at Renshaw and Australia captain Steve Smith, with an exchange of words between opposing players forcing the umpires to intervene to calm the situation. Cheered on by a big Sunday crowd, Ishant's hostile spell of fast bowling troubled Smith but Australia managed to keep India at bay for more than 20 overs with a second-wicket stand of 30. After a 10-over spell by Ashwin, during which he conceded just eight runs for the wicket of Warner, India captain Virat Kohli brought on left-arm spinner Ravindra Jadeja. He gave India the second success of the morning when Smith was out for eight, getting an inside edge to his pad to be caught by behind by Saha. The 20-year-old Renshaw, who scored 68 in Pune, was dropped by Kohli off Umesh on 29 and went on to complete his third half-century in tests. Renshaw, who made 60, hit Jadeja for the first six of the match over long-off but was outsmarted two balls later when the bowler got one to spin past the batsman for Saha to complete the stumping. Jadeja grabbed a third wicket when he dismissed Peter Handscomb for 16 with Ashwin completing a juggling catch at mid-wicket.
#India #Australia #Virat Kohli #Steven Smith #Ravindra Jadeja #TEST MATCH CRICKET #Matt Renshaw
You May Also like: