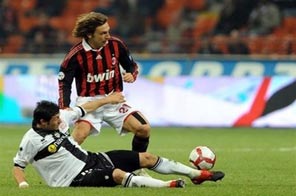 MILAN: Two weeks can be a long time in football and that has been exactly the case ahead of Tuesday's Champions League clash between AC Milan and Real Madrid at the San Siro.

Real come into this match in turmoil and still reeling from their humiliating Spanish Cup 4-0 thrashing at the hands of third division Alcorcon last Tuesday that has left Chilean coach Manuel Pellegrini's job looking decidedly unsafe.

They may have since beaten Getafe in the league but nonetheless Real have lost three of their previous five matches, including the 3-2 reverse at home to Milan two weeks ago.

Back then it was the Italians and their coach Leonardo who were standing on shaky ground.

They had just ended a four-match winless run with a come-from-behind 2-1 home success against AS Roma but had been struggling all season to find the net.

They had lost at home to Swiss minnows FC Zurich in their previous group C match and less than 10 games into his Milan career Leonardo's job already seemed on the line.

But Milan came away from the Santiago Bernabeu with an unlikely 3-2 win and are now on a five-match unbeaten run, including four victories -- which would have been five but for an injury-time collapse away to Napoli last Wednesday.

Milan's scoring problems also seem to be a thing of the past as they have found the back of the net 11 times in their last five games having managed only six in their first nine matches.

And Dutch midfielder Clarence Seedorf believes the Italians have their confidence back.

"Our confidence is definitely better now than it was before the first game against Real," he said.

"There's no fear, it will be a game between two teams who respect each other and will look to win but I know something -- Milan have never feared anyone."

The pressure is firmly on Madrid and Pellegrini with the team struggling in the injury absence of the world's most expensive player, Cristiano Ronaldo.

Having made a strong start to their season and been in free scoring form, Real have since faded and expensive French signing Karim Benzema is looking increasingly lost at the club.

Their one saving grace is that Argentine forward Gonzalo Higuain is back from injury and straight into scoring form, having bagged a brace in Saturday's 2-0 win over Getafe.

"I hope I still have some goals left for Milan," said Higuain, who also looked forward to next weekend's city derby. "Let's hope we can win there and then against Atletico Madrid."

Real scored twice against Milan in their last match but one of those was a gift to Raul after a howler by Milan's Brazilian goalkeeper Dida.

However, since then he's been majestic, producing a stunning one-handed close range block against Chievo in injury time with the score at 1-1, which then allowed Milan to head straight up the other end and score a winner.

That won't be nice reading for Real but scoring goals hasn't been their primary problem anyway, their defence has been their major worry.

The statistics don't look bad at all, they're only one point behind Barcelona in the league, having scored one goal less and conceded only one more.

But a closer look reveals some serious flaws. Real have put most smaller opposition to the sword but in their biggest two tests this season, they've come up short.

They lost 2-1 away to Sevilla and suffered that home loss to Milan. And any defence that concedes four goals to a side two divisions below them has to be questioned.

It all suggests that an entertaining game could be in store for the San Siro crowd, as there's nothing like defensive lapses to create attacking action.

What's more, win, lose or draw, both sides will still be favoured to progress to the knock-out rounds as they sit on six points each with Marseille and Zurich three points back.

#Roles reversed as Milan host troubled Real
You May Also like: