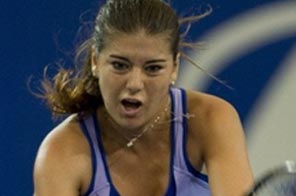 Sorana Cirstea of Romania hits a return against Samantha Stosur of Australia during their singles match of the first session of the Hopman Cup in Perth which Cirstea won 3-6, 6-4, 6-3. Romania have stunned top seeds Australia with an upset 2-1 win in their Group A tie at the mixed teams Hopman Cup at Perth's Burswood Dome. Source: AFP

PERTH: Romania stunned top seeds Australia with an upset 2-1 win in their Group A tie at the mixed teams Hopman Cup at Perth's Burswood Dome on Saturday.
With the tie split after the respective singles matches, the Romanian pairing of Sorana Cirstea and Victor Hanescu shocked Australia's Samantha Stosur and Lleyton Hewitt in the deciding mixed doubles.

With Cirstea continuing the good form she earlier showed in beating Stosur in the women's singles and Hanescu overcoming the cramp that plagued him in his singles loss to Hewitt, the Romanians won the doubles in straight sets, 7-5, 6-1, to clinch a marathon tie.

The opening day of the tournament got off to a bad start for the Australians when the 45th-ranked Cirstea trumped the 13th-ranked Stosur in three sets, 6-3, 4-6, 6-3, to give her side the early advantage.

Both Hewitt and Stosur boast grand slam doubles titles and the Australians were expected to be the most accomplished doubles team in the tournament, but the Romanians had all the answers, dominating the second set as Stosur's form woes continued.

Cirstea was thrilled with her start to 2010.

"For me today was a perfect day," she said.

"I started with a really good singles match and I beat Sam, who is 13 in the world and is playing great.

"Then coming out and playing mixed with Victor for the first time in my life and I cannot expect more than this."

Having only been in Australia for three days after spending Christmas in much cooler climes in his home country, Hanescu was exhausted by the end of the doubles.

"I am very tired. It is very hot and humid here coming from Romania after a white Christmas and lots of food," he said.

Earlier, the 22nd-ranked Hewitt had his hands full against the towering Hanescu in a marathon match that a couple of times looked to be heading the Romanian's way.

However, Hanescu suffered from cramp in the dying minutes of a match that went to 150 minutes.

Hanescu was clearly struggling in the last few games of the match and tried to keep the rallies short by hitting winners and even attempted an underarm serve on match point in the tie-break.

The world number 48 sought treatment at the end of the ninth and 11th games in the third set, but was not allowed an injury time out under new rules introduced this year that prevent players being treated for cramp during matches.

Hewitt himself appeared to be in a little discomfort from a right foot problem at times, but said he was in better shape when the match needed to be won.

"I was doing a lot better than him. I can tell you that."

Hewitt also welcomed the change to the rules on cramp.

"Cramp is a lack of condition," he said.

"For those players that do all the hard work, there has to be some bonus for doing all the hard yards and putting yourself on a line day in, day out and I think it is a good thing."

Stosur seemed to have control of the match with Cirstea after cruising through the first set on the back of her powerful service.

However, Cirstea started to find the range with her groundstrokes in the second set, Stosur's serve dropped off and she also started making elementary forehand errors.

It was the 19-year-old Cirstea's first win over Stosur in three meetings, the Australian winning both previous encounters in straight sets.

#Romanians stun home team in Perth
You May Also like: