Ronaldo out of Champions League match 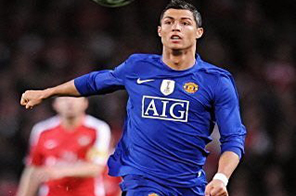 MADRID: The world's most expensive player Cristiano Ronaldo will miss Tuesday's Champions League match with AC Milan as he has not recovered from a nagging right ankle injury, it was announced on Sunday.

Ronaldo will not be the only absentee as Real try to keep their Champions League campaign on track after losing 3-2 to Milan in the previous meeting as former Spanish international midfielder Guti is also to miss the match after falling out with coach Manuel Pellegrini.

The 33-year-old was also left out of the squad for Saturday's 2-0 victory over Getafe which saw them close to within a point of leaders Barcelona.

According to Spanish media reports Guti and Pellegrini had a serious row at half-time of Tuesday's humiliating 4-0 Spanish Cup defeat by third division Alcorcon.

Pellegrini, though, insisted that the reason he had not selected Guti for the match with Getafe was that he was recovering from injury.

Real will be looking to avenge their defeat to Milan at the Bernabeu and gain some breathing space over the Italians, both sides presently on six points.

#Ronaldo out of Champions League match
You May Also like: