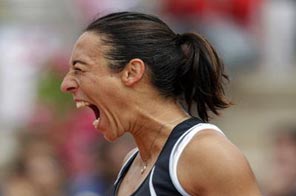 MOSCOW : The last seed in the women's tournament Italy's Francesca Schiavone cruised comfortably into the women's Kremlin Cup final with a straight-set win over Ukraine's Alona Bondarenko here on Saturday.

In Sunday's final eighth-seed Schiavone will face Olga Govortsova of Belarus, who confidently swept aside Alisa Kleybanova of Russia 6-2, 6-1.

The 29-year-old Schiavone, the 2005 runner-up, won 6-4, 6-0 in one hour 11 minutes to record her fourth win over Bondarenko in their sixth head-to-head meeting.

"I'm happy with my playing today," Schiavone said. "I was serving good, returning well. I moved quickly, played agressively and dominated the playing in general.

"I hope that I can manage to play that style tomorrow (Sunday) in the final."

Bondarenko, who is 36th in the WTA rankings, started the match with an immediate break but Schiavone took four consecutive games for a 4-1 lead.

The 25-year-old Ukrainian reduced the arrears with a break in the ninth game but Schiavone made the decisive break in the 10th game to gain a one-set advantage in 46 minutes.

In the second Schiavone underlined her supremacy on the hardcourts of Moscow's Olympic indoor stadium, producing three more breaks to win the second set to love and the match.

Meanwhile, Govortsova levelled her head-to-head record with Kleybanova at two wins all.

Govortsova looked more focused and was slightly more accurate from the start breaking Kleybanova's serve on three occasions to put herself one set up in 40 minutes.

In the second set Govortsova, 21, confirmed her supremacy breaking three times to win the set and the match in 1hr 26 minutes.

"It will be my second career final and I want to perform at my best tomorrow," Govortsova said.

#Schiavone to face Govortsova in tennis final
You May Also like: