Senna name back in Formula One 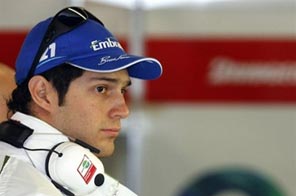 Honda's Brazilian Formula One driver Bruno Senna in the pit during a test session at the Catalonia racetrack in Montmelo, near Barcelona. Source: AFP

ABU DHABI: The Senna family name will return to Formula One next season when Bruno Senna, nephew of the late three-times world champion Ayrton, races with the Campos Meta team.

The Spanish team confirmed Senna's place in the team in a statement on Saturday.
Senna, runner-up in the 2008 GP2 series, said he was very happy to secure finally a drive in Formula One after months of speculation and weeks of talks.
He confirmed the news in a brief statement in which he said: "I want to thank everyone. After weeks of negotiations, we were finally able to close a deal.
"I am very content and want to share my happiness with the fans. It's time to put my head down and prepare for next year. There is a lot of work ahead of me."
Campos Meta chief executive officer Enrique Rodriguez de Castro said: "For Campos Meta, it is an extraordinary honour to return the name of Senna to Formula One.
"The deal with Senna confirms and re-enforces our prime objective of being not only the first Spanish Formula 1 team, but rather the first Iberian-American F1 team.
"The 2014 World Cup, the 2016 Olympics, and three drivers in F1 - it's clear that Brazil is coming up!"
Ayrton Senna, who won the drivers world title three times, was killed in an accident at the 1994 San Marino Grand Prix.
Bruno Senna added: "I'm absolutely delighted to fulfil a lifetime dream. Now it is time to set new targets. The project that Campos Meta 1 developed is designed to succeed both on and off the track."
De Castro said he was surprised at the progress Senna had made from single-seater racing as a junior only a few years ago to reaching Formula One.
He added: "We have followed him closely since his early days in minor series and testified how quickly he developed his speed and skills at GP2 to become one of the most promising up-and-coming drivers of his generation.
"It is astonishing how fast he is entering the F1 scenario after just a few years in motor racing."

#Senna name back in Formula One
You May Also like: