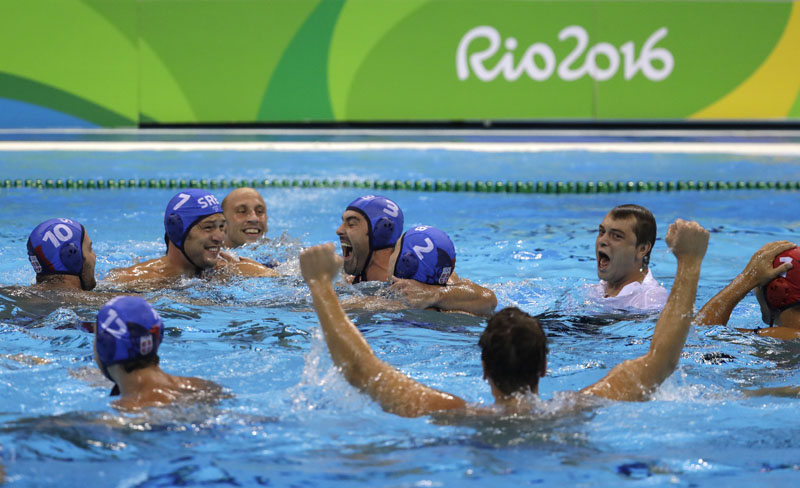 Members of the Serbia men's water polo team celebrate after winning the gold medal match against Croatia at the 2016 Summer Olympics in Rio de Janeiro, Brazil, on Saturday, August 20, 2016. Photo: AP
RIO DE JANEIRO: When it was all over, when they had the title they had coveted for years, Serbia's jubilant players hung the country's flag over one of the floating cages in the pool. The soaked flag said it all. Serbia had finally conquered the Olympic men's water polo tournament. Dusan Mandic scored four times, Branislav Mitrovic made 12 saves and Serbia dethroned Croatia with an 11-7 victory at the Rio Games on Saturday.
"This is maybe the best feeling in my life," center Slobodan Nikic said. "I feel like I'm flying."
It was Serbia's first Olympic gold medal in perhaps its favorite sport. The former Yugoslavia won three gold medals and Serbia and Montenegro lost in the 2004 final in Athens, but Serbia finished third in each of the previous two Olympics. After winning the world and European championships, Serbia's star-studded roster had to deal with the burden of expectations when it arrived in Brazil. Then the pressure intensified when the team opened with a pair of draws and a surprising loss to the host country. But Serbia eventually found its way and closed with five consecutive victories by a combined score of 53-38. No settling for bronze this time around. "We want this from the whole beginning of our careers," said Filip Filipovic, who scored two goals in the final and was voted tournament MVP. "We trained so hard and so much. We suffer so much for this gold medal. As we saw, the road to this Olympic gold was very tough and very stressful for us." There were hugs on Serbia's side of the pool as the final seconds ticked off, and the players jumped right in when it was over. Coach Dejan Savic avoided the traditional swim with his team, even sneaking off the deck for a moment before returning to the bench to watch the celebration. He wagged his finger and blew kisses to his players as they beckoned him to join them in the water. "This is it for us. Let's say it's game over," a grinning Filipovic said. Sandro Sukno scored three times for Croatia, which won gold in London. Javier Garcia Gadea had two goals. "Serbia was the better team," Croatia coach Ivica Tucak said. "We tried everything we had against them but they were just too physical and strong. The result shows that." Marko Bijac, who was voted the tournament's top goaltender and played a key role in Croatia's run to the final, made five saves before he was replaced by Josip Pavic after Filipovic scored to make it 8-4 with 2:14 left in the third. "They got easy fouls and they are such strong shooters, it's very hard to stop," Bijac said. Italy beat Montenegro 12-10 for the bronze medal. Stefano Tempesti led the way with 10 saves, and Christian Presciutti scored four times. It's the second straight Olympic medal for Italy, which lost to Croatia in the London final. Italy also became the only country to medal in each water polo tournament in Brazil, with the women taking home silver on Friday. "It's a great moment for (the) Italian water polo team," Tempesti said. The 37-year-old Tempesti had surgery on his right eye after he got hurt in the final match of the Italian championship in May. He finished with 51 saves in his fifth Olympics. Asked if the victory over Montenegro was his final game, he responded: "I think so. I'm quite sure, yeah." "To be here with my eye, all the surgery, everything, day by day I had to learn how to come back in this Olympics," Tempesti said, "and winning this medal, it's the right reward, the best reward for what I have gone through in the last few months." Valentino Gallo added three goals for Italy, which lost to Serbia in the semifinals. Montenegro finished fourth for the third straight Olympics. "We must make some changes, put some new players (on the team), but in this moment we don't have a lot of good young players," Montenegro coach Vladimir Gojkovic said. "If we did they would be here now."
#Rio de Janeiro #2016 Rio Olympics #Serbia wins gold #Men's water polo #Dusan Mandic #Branislav Mitrovic
You May Also like: