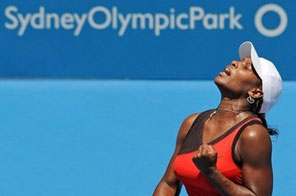 Serena Williams of the US shows her delight at winning a game during her match against Maria Jose Martinez Sanchez of Spain at the Sydney International tennis tournament, on January 12. Williams won in straight sets 6-1, 6-2. Source: AFP

SYDNEY: World number one Serena Williams has warned her Australian Open rivals she will be tough to beat after dropping just three games to reach the quarter-finals of the Sydney International on Tuesday.

The 11-times Grand Slam champion had a 70-minute workout in temperatures topping 35 degrees Celsius (95 degrees Fahrenheit) in her first match of the season and put away Spaniard Maria Jose Martinez Sanchez 6-1, 6-2.

Williams will have a last-eight match against 43rd-ranked Vera Dushevina, who accounted for fellow Russian Elena Vesnina 6-3, 6-4.

The American, bidding for her fifth Australian title this month after winning last year, is typically supremely confident in her ability to take on all-comers.

"I feel like I have no pressure on myself," she said. "If I play the best I can play, I've always said I'm very difficult to beat."

Her task of landing the Sydney WTA title has eased with the loss of seeds Caroline Wozniacki, Jelena Jankovic and Vera Zvonareva in her half of the draw and she has won her only meeting with Dushevina.

"I don't care who I play. Whenever I play someone they play their best," she said.

"Whoever I play, believe me, they're gonna play like number one on that particular day against me for whatever reason, so it doesn't matter for me." Williams, who faces a twin Belgian threat at this year's opening Grand Slam from US Open champion Kim Clijsters and seven-times major winner Justine Henin, has won her four Australian Opens in alternate years.

"I know. Don't say that," she told a reporter. "Well, it's not a bad thing to win every other year, so I'm not gonna complain about that.

"So I want to win this year, but if I can win guaranteed next year, I'm OK with that, too."

World number two Dinara Safina kept on course to face Williams in Friday's final when she came back from 0-5 down in the opening set to beat the 10th-ranked Agnieszka Radwanska of Poland.

The Russian, who was blitzed by Williams in last year's Australian Open final, advanced to the quarter-finals late Wednesday with defending champion Elena Dementieva after a 7-5, 6-4 victory.

"Well, a little bit of a slow start, but it was a start. It was a winning start," Safina said.

Third seed Svetlana Kuznetsova crashed out to Slovak's Dominika Cibulkova 7-5, 6-2 to continue her dismal run at the Sydney tournament.

"I'm used to it. I don't always play good here. Only once I played the final here with Justine Henin," Kuznetsova said.

The 24th-ranked Cibulkova will play sixth seed Victoria Azarenka, who saw off Japanese veteran Kimiko Date Krumm 6-1, 5-7, 7-5 in more than two and a half hours.

#Serena's warning for Open rivals after Sydney win
You May Also like: