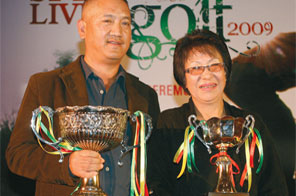 Winners of the third Spey Livet Golf Tournament AT Sherpa and Kalpana Limbu (right) with the trophies in Kathmandu on Saturday. Source: THT

Played under 3/4 stableford format, Sherpa won the championship with 35 points. Srihar SJB Rana finished as runner up with 32 points. Mithun Rai was the Gross winner with 23 points. Kalpana Limbu earned the ladies’ section title with the score of 26 points, three more than runner up Pushpa Rai.

In all 64 golfers — including eight ladies — were in fray for the championship organised by the RNGC along with Spey Livet Whisky.

#Sherpa wins Spey Livet Golf tourney
You May Also like: