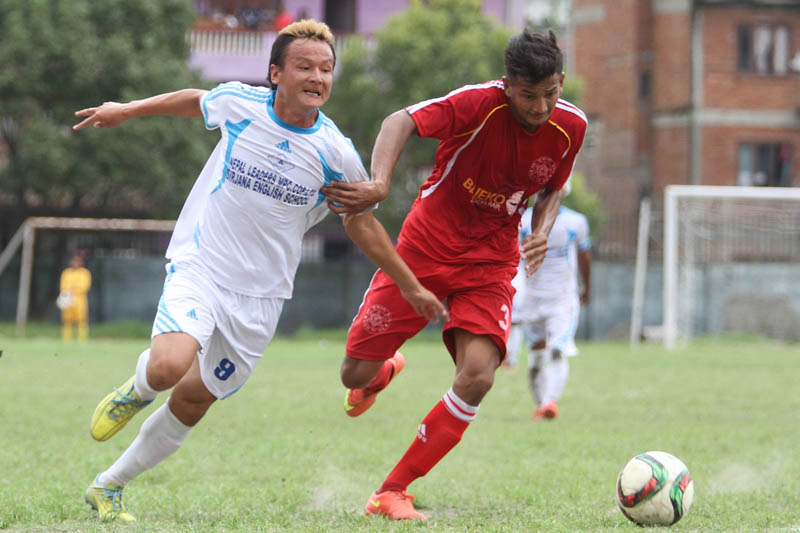 Players of Nayabasti Youth Club and Shree Kumari Club (right) vie for the ball during their Martyrs Memorial B Division League match at the Nepal APF Club grounds in Halchwok on Monday. The match ended at 1-1 draw. Photo: THT
Shree Kumari Club missed the chance of moving to the top of the Martyrs Memorial B Division Football League when they were held to a 1-1 draw by Nayabasti Club, while Chyasal Youth Club and Tushal Youth Club registered victories here today. Shree Kumari had a chance of reaching the summit for the first time in three rounds and Subarna Samekham put the team in right track when he opened the scoring in the 37th minute. They were to blame themselves for missing the opportunity as Kuldip Karki scored an own goal in the 60th minute that forced them to share points with Nayabasti in the day’s first match at the Nepal APF Club grounds. In another match, Chyasal defeated Satdobato Youth Club 2-1 at the same venue. Binod KC put Chyasal ahead in the 53rd minute and Arun Shrestha doubled the tally in the 58th minute. Ripu Bhulan cut the deficit in the 80th minute but that was not enough for Satdobato to avert the loss. At the ANFA Complex grounds in Lalitpur, Tushal recorded a 3-1 win against Mahabir Club. Tushal took an early lead through Anil Dhami’s goal in the 17th minute and they doubled the advantage a minute later thanks to a suicide goal from Mahabir’s Bikash Gurung, who put the ball into his own nets while trying to clear the ball. Tapan Karki made it 3-0 in the 39th minute before Dorje Tamang scored the consolation goal for Mahabir in the 86th minute. The results meant Nayabasti remained unchanged at the third position with seven points, behind leaders New Road Team and Ranipokhari Corner Team on inferior goal difference. The three teams are undefeated so far with two wins and a draw. With the win, Chyasal moved to the fifth position with six points, behind Pulchowk Sports Club on inferior goal difference. Tushal, who also have six points, are sixth, while Mahabir are at 12th position with one point.
#ANFA Complex #Martyrs Memorial B Division Football League #Satdobato Youth Club #Shree Kumari Club #Tushal Youth Club #Mahabir Club #Pulchowk Sports Club #Nayabasti Club #Chyasal Youth Club
You May Also like: