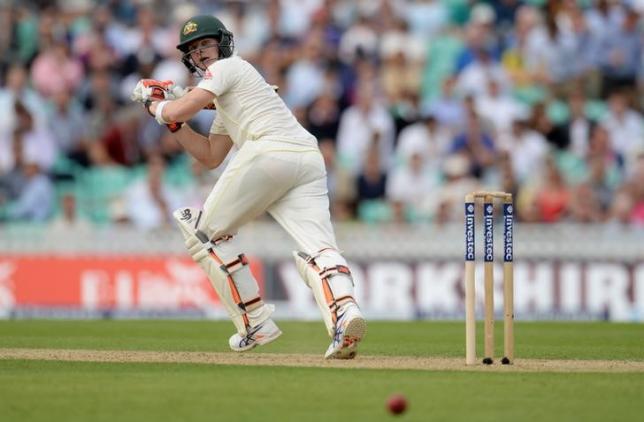 File photo of Australia's Steve Smith playing a shot. Reuters
CHRISTCHURCH: Steve Smith and Adam Voges steered Australia through to a comprehensive test series victory over New Zealand on Wednesday that takes the tourists back to the top of the test world rankings. After thrashing New Zealand in the first test by an innings and 52 runs in Wellington last week, Australia sealed the second match by seven wickets shortly after lunch on the fifth and final day at Hagley Oval. It was their seventh win in 11 games under Smith's captaincy. The match was New Zealand captain McCullum's 101st and final test. The 34-year-old now heads into international retirement but will still play on the lucrative Twenty20 circuit. Smith ended the match on 53 not out, his 16th test half century and follows up his 138 in the first innings. Voges hit the winning runs, a boundary through the covers to move to 10 and take the visitors to 201 for three. Australia had looked like achieving their victory target when they reached 169 for two at the scheduled lunch break before Joe Burns (65) was bowled by Trent Boult in the additional four overs offered by the umpires. Voges and Smith then opted to see out victory after the break. Usman Khawaja (45) was the only other wicket to fall in the first session on Wednesday when he was well held by Brendon McCullum at first slip off Tim Southee. Australia had only needed to draw the match at Hagley Oval to retake the top ranking in test cricket from India. Burns resumed on 27 and Khawaja on 19 with Australia 70 for one after being set 201 runs to win the match having dismissed the hosts in their second innings for 335 after tea on Tuesday. Knowing they had the luxury of time to score the further 131 required, neither Burns nor Khawaja took any unnecessary risks in the first session, though Smith and Burns did increase the run rate after the left hander departed. Neil Wagner, who took a career best 6-106 in the first innings with short pitched tactics, resorted to it again on Wednesday but the left armer rarely threatened on a placid pitch and in hot conditions.
#Australia #Steve Smith
You May Also like: