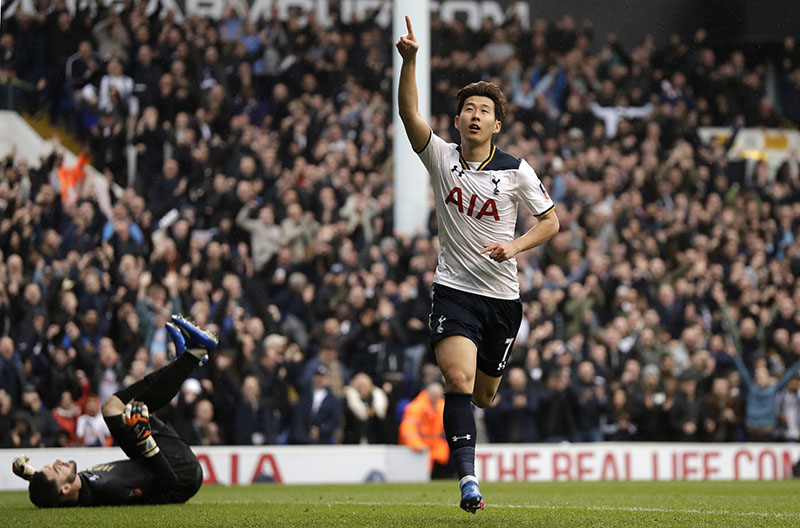 Tottenham's Heung-Min Son celebrates after scoring his side's third goal during the English FA Cup quarterfinal soccer match between Tottenham Hotspur and Millwall FC at White Hart Lane stadium in London, on Sunday, March 12, 2017. Photo: AP
LONDON: Son Heung-min grabbed a hat trick as he seamlessly filled the void left by Harry Kane's injury-enforced early departure, powering Tottenham into the FA Cup semi-finals with a 6-0 rout of third-tier Millwall on Sunday. The South Korean made it six goals in four FA Cup games this season and he even set up fellow forward Vincent Janssen to end a seven-month wait for a goal from open play since joining Tottenham. Christian Eriksen, who replaced Kane after 10 minutes, provided the cross for Son's third after scoring the opener and also set up Dele Alli's second-half strike. But the joy at sealing Tottenham's trip to the semi-finals for the first time in five years was tempered by Kane's ankle injury. Tottenham's top scorer missed 10 games after twisting the same right ankle in September and manager Mauricio Pochettino fears the worst again after he left in a protective boot. "We cannot cry, we have to try to be positive," Pochettino said. "We have enough players to replace him." Son can never be sure of a starting spot but he has netted 13 goals this season. "Son can play like a striker," Pochettino said. "If you remember one of our best performances was a game against Manchester City here and he was the striker here when Harry was injured (and set up Alli's goal). "We have different possibilities and different formations. Of course I am sad about Harry's injury but now I try to find solutions and try to find which is the best player to replace him." Son's first goal came after initially struggling to control a pass but he recovered, cutting inside defender Jake Cooper and curling a shot into the far corner five minutes before halftime. Son doubled his tally nine minutes into the second half, getting ahead of Cooper again to latch onto Kieran Trippier's high pass from the halfway line and volleying into the net. The third in stoppage time was helped into the net by goalkeeper Tom King who let Son's strike slip through his legs as he fumbled the save. Son was also the target of abuse from some Millwall fans when he touched the ball in the first half at White Hart Lane, with chants of "DVD" and "selling three for a fiver" aimed at him. Millwall manager Neil Harris was asked in the post-match news conference about such chants being racially offensive Asian stereotypes. "I'm sure it will be investigated and left to the authorities," Harris said. "We want people dealt with harshly. ... It's wrong in football and wrong in society." Herman Ouseley, the Millwall-supporting chairman of anti-racism group Kick It Out, was unaware of the offensive interpretation of the "DVD"-related chants. "If complaints are made they will have to be looked at to see if they have any validity to see if it stirs up racial hatred," Ouseley told The Associated Press. The English Football Association plans to investigate the incident, and gather observations and evidence from the clubs and police. There was a heavy police presence outside the ground, with some confrontations between rival fans before and after the game. Inside, though, there was no disorder at what could be the last FA Cup game at White Hart Lane. The semi-final will see the 1991 FA Cup winners visit their second home at Wembley. Tottenham's Champions League and Europa League games were played at English soccer's national stadium this season and it is set to play every fixture there next season as White Hart Lane is demolished to make way for a new stadium. Tottenham joins north London rival Arsenal and Manchester City in a strong semi-final lineup that will be completed after Chelsea hosts Manchester United on Monday.
#Tottenham #Son Heung-Min #Harry Kane #FA Cup semi-finals #Millwall
You May Also like: