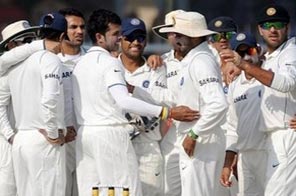 Shanthakumaran Sreesanth (4th from left) is congratulated by team-mates after taking the wicket of Sri Lanka's Tharanga Paranavitana in Kanpur on November 26. Source: AFP

KANPUR: Paceman Shanthakumaran Sreesanth grabbed three quick wickets as India reduced Sri Lanka to 138-5 at lunch on the third day of the second Test here on Thursday.
Sreesanth, 26, marked his comeback to international cricket in style, dismissing Sri Lankan captain Kumar Sangakkara, opener Tharanga Paranavitana and Thilan Samaraweera in a fiery starting spell.
Off-spinner Harbhajan Singh chipped in with the wicket of Angelo Mathews (13) to have Sri Lanka reeling in an engrossing first session that saw 72 runs scored at the cost of four wickets.
Mahela Jayawardene was batting on 26 with Prasanna Jayawardene on two at the break.
Sri Lanka trail India by 504 runs with five wickets in hand and require another 305 runs to avoid a follow-on.
Replying to India's imposing first innings score of 642, Sri Lanka's batsmen resumed the day at 66-1 but failed to build partnerships, with Sreesanth and his new-ball partner Zaheer Khan troubling them with their line and length.
Sreesanth (3-57) gave India an early breakthrough when Paranavitana (38) poked at a wide-ish delivery to be caught by a diving Mahendra Singh Dhoni behind the stumps.
The right-arm quick, returning to the Indian squad after playing his last Test 19 months ago at the same Green Park Stadium venue, struck again four overs later to remove the other overnight batsman, Sangakkara.
Sangakkara (44) tried to drive the ball through the covers but ended up getting an inside edge onto his stumps. He hit five fours in his 108-ball knock.
Samaraweera (two) was also dismissed playing on to his stumps while attempting a drive.
The third and final Test begins in Mumbai on December 2.


#Sri Lanka reel from Sreesanth onslaught
You May Also like: