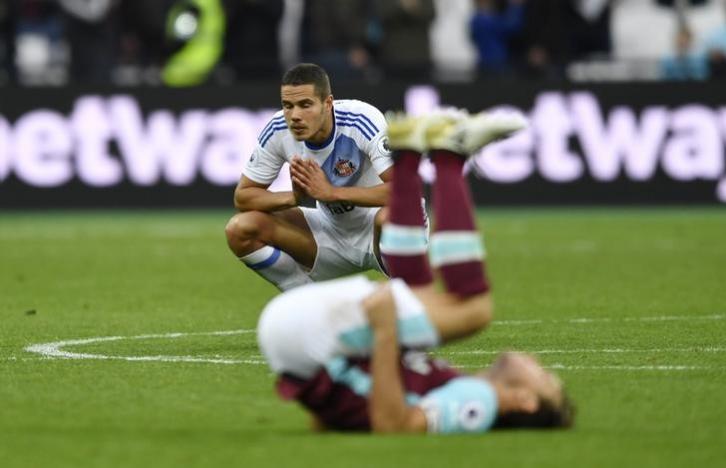 Sunderland's Jack Rodwell looks dejected after the match. Reuters
LONDON: Sunderland became the first top-flight club in more than 100 years to fail to register a win in any of their first nine league games in two successive seasons when they suffered a 1-0 defeat by West Ham United on Saturday. Winston Reid's goal deep into stoppage time was the latest blow for Davis Moyes's side who have managed just two draws from their opening nine matches. Bury, in 1906, were the last club to suffer two such dreadful starts to a top-flight season. Sunderland can take heart in the fact that Bury escaped relegation, but so far there is precious little evidence to suggest they can pull off the sort of recovery they managed last season when Sam Allardyce was installed as manager in January. Defeat was cruel on Sunderland at the London Stadium, according to Moyes who is coming under increasing pressure. "It was a very harsh way to lose a game," Moyes, whose side face leaders Arsenal next week, told the club's website. "I was pleased with a lot of what the players did today. It was always going to be a tough game. "I thought we competed and did quite well. We are disappointed, the players worked so hard and we've dropped a point in the end." Jermain Defoe's 15 goals proved the catalyst for Sunderland's escape last year but the former England striker had no service on Saturday against his old club. Official statistics showed he touched the ball once in the West Ham penalty area and Sunderland never looked in danger of adding to their meagre haul of six goals so far this season.
#West Ham United #Sunderland #Sam Allardyce #Winston Reid
You May Also like: