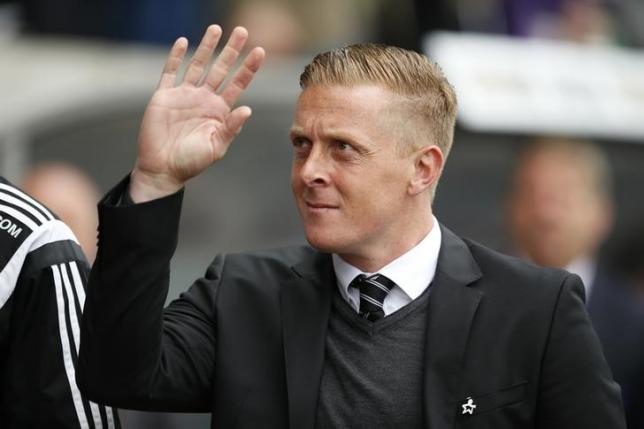 Swansea manager Garry Monk. Photo: Reuters
Swansea City manager Garry Monk was rewarded with a new three-year contract on Friday having steered the Welsh club to their highest English Premier League finish last term. Monk, 36, a former defender who played for Swansea in all four English leagues, had two years left on his existing deal but the club were quick to reward his efforts with a new one through to 2018 after last year's eighth place finish. "It's deserved reward for the fantastic season we've just had and all Garry's hard work, commitment and loyalty to our football club over many years," Swansea chairman Huw Jenkins said in a statement. "We also feel it is vital to have stability within our football club, especially with Garry going into such a big season where the reward for remaining within the Premier League is going to be greater than ever in terms of finance and global exposure." Monk played 270 times for the Swans before retiring to take over as manager in February last year following the exit of Danish great Michael Laudrup. His first match in charge was a memorable 3-0 win over Welsh rivals Cardiff City as he steered the club away from the relegation zone. Last season was Monk's first full year in charge and he oversaw a club record Premier League finish and points total of 56, helped with home and away victories over English giants Manchester United and Arsenal.
#English Premier League #Garry Monk #Swansea City
You May Also like: