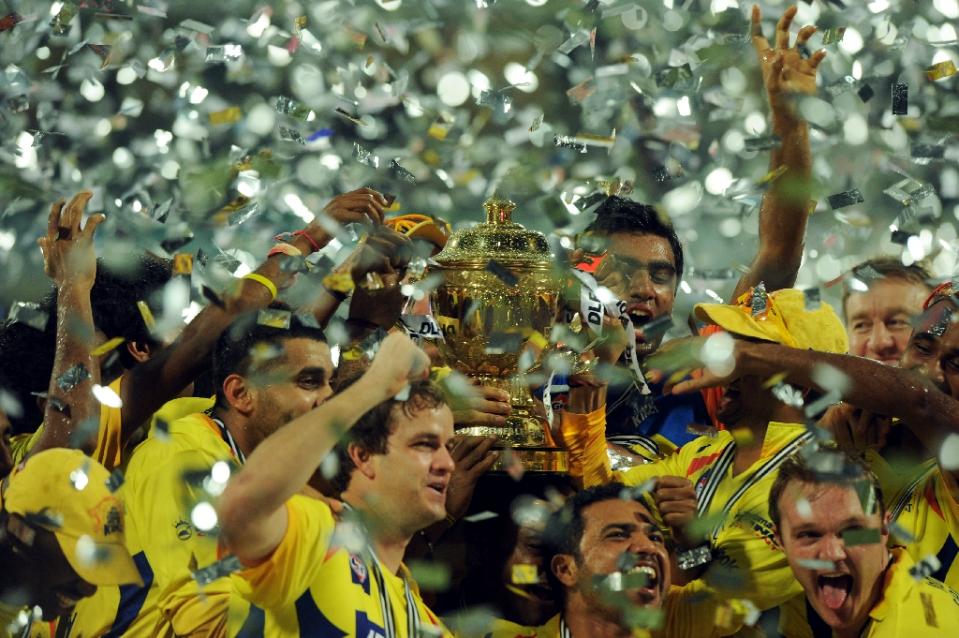 Chennai Super Kings players celebrate with the trophy after the IPL Twenty20 cricket final match against Royal Challengers Bangalore in Chennai on May 29, 2011. Photo: AFP
NEW DELHI: The Twenty20 Champions League, an international tournament featuring the top domestic teams of the major cricket nations, is to be scrapped after failing to excite fans, organisers announced Wednesday. The three-week event had been billed as the richest club tournament in the sport with a total prize pool of $6 million that included a winner's purse of $2.5 million. Jointly owned by the cricket boards of India, Australia and South Africa, the tournament was launched in 2009 with much fanfare following the overwhelming success of the Indian Premier League (IPL). But after six editions, the co-owners said the league would be "discontinued with immediate effect" due to "limited public following". "The governing council determined that the discontinuation of the league was the most appropriate decision due to the tournament's limited public following," said a statement from representatives of the Indian, Australian and South African boards. "It was a fantastic platform for players from around the world to showcase their talent and the participating teams thoroughly enjoyed the experience over the last six seasons. "Unfortunately, off the field, the Champions League wasn't sustaining the interest of the fans as we had hoped." Although South Africa did host one of the editions of the tournament, all the others were staged in India. While the glitzy IPL regularly draws sell-out crowds, the Champions League was often played to a backdrop of a few hundred spectators while the viewing figures were only a fraction of those for IPL matches. Speculation that the tournament, for which the International Cricket Council had laid down a three-week window in September and October, may be cancelled had been rife over the last six months. On Tuesday, an Indian Supreme Court-appointed panel suspended two IPL teams, Chennai Super Kings and Rajasthan Royals, for two years after officials betted on matches involving their own teams. The Chennai team won the Champions League twice, as did another IPL side, Mumbai Indians. Besides teams from the host boards, T20 champions from New Zealand, Pakistan, Sri Lanka, England and the West Indies have all taken part in the tournament.
#Cricket #International Cricket Council #Indian Premier League #Twenty20 Champions League #IPL
You May Also like: