T20 is all over for Australia 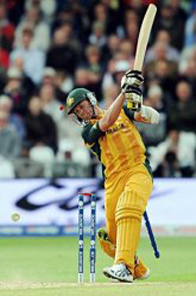 NOTTIGHAM: Sri Lanka knocked Australia out of the World Twenty20 on Monday after winning their group C match at Trent Bridge by six wickets.Sri Lanka qualify for the Super Eights stage of the tournament along with West Indies who defeated Australia on Saturday.Australia made 159-9 before Sri Lanka reached their target in the final over.

Earlier, mystery spinner Ajantha Mendis and fast bowler Lasith Malinga claimed three wickets each as Sri Lanka restricted Australia to 159-9 in the World Twenty20 on Monday.
Mendis, who turns the ball both ways without a visible change in his bowling action, wrecked the top order in a match Australia must win to stay in the competition.
Slinger Malinga then polished off the lower order on an even-paced wicket at the Trent Bridge.
Ricky Ponting's men, beaten by the West Indies in their first match, collapsed to 94-6 in the 15th over, before David Hussey and Mitchell Johnson led a late revival.
The pair put on 41 off 21 balls for the seventh wicket with Hussey hitting 28 off 22 balls and Johnson smashing 38 off 13 with two fours and as many sixes.
Australia hammered 65 runs in the last five overs to set Sri Lanka a victory target of eight runs an over.

#Sri Lanka knock Australia out of Twenty20
You May Also like: