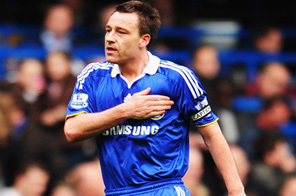 Rooney has scored eight goals in seven World Cup qualifiers to lead England to the brink of next year's finals in South Africa.

A victory on Wednesday would seal the deal for England, but Croatia are still in the hunt for second place and are plotting a repeat of their famous November 2007 win at Wembley.

Croatia boss Slaven Bilic believes the key to success against Capello's side is to mark Rooney closely because the Manchester United star plays such a "wild" game he is liable to explode at any moment.

But Chelsea defender Terry is confident that Rooney is now mature enough to walk away from any confrontations and instead concentrate on doing his damage in front of goal.

"Wayne is in great form at the moment. He's scoring a lot of goals as well as giving a lot to the team.

"He becomes more important as each game comes. He is so young but plays with so much experience.

"He is one of those players who is literally a nightmare to play against."

Capello has seen few signs of Rooney's fiery temper on international duty and is confident the striker will keep cool under any provocation.

"Rooney, with me, I remember only once when he did a bad tackle. Only once," Capello said.

Terry has often delivered passionate speeches to his team-mates in the final moments before England and Chelsea matches, but he revealed there will be no special words in the dressing room on Wednesday.

"The manager does his thing before the game and all the lads will say their piece. There will be no big speech from me. Everyone knows what we have to do," Terry added.

Terry was sidelined through injury when Croatia won 3-2 at Wembley two years ago, but he watched the match from the stands and the painful memory still lingers.

He admits revenge is at the back of the team's minds, even though Capello has tried to ensure his players are solely focused on how to win the match.

"It's very important for me personally and collectively. The disappointment of missing the Euros is still hurting in the back of my mind and in the back of everyone's mind," Terry said.

"It is still in the back of each player's mind a bit. But it is a new era now and a new start for everyone since the new manager has come in.

"It is important the manager draws attention away from it, but difficult for players to collectively rule it out of our minds.

"It is a chance to correct things from the bad campaign we had last time.

"It would be nice for our fans and ourselves to finish the job at Wembley where we threw it way before. It would wipe it all away."

The prospect of qualifying with two games still to play is another incentive for England as it would allow Capello extra time to experiment ahead of the World Cup.

"If we can put ourselves there early with a lot of preparation, we could have a good chance in the World Cup. But first and foremost we have to win on Wednesday," Terry said.

"Ideally to finish the group early would give the manager a chance to try new things."

#Terry backs Rooney to silence Croatian taunts
You May Also like: