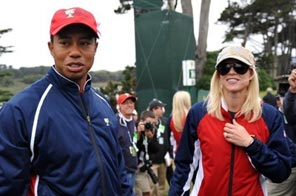 Tiger Woods and his wife Elin Nordegren are pictured in October 2009 in San Francisco. Source: AFP

MIAMI: Tiger Woods suffered facial injuries in a single vehicle car smash outside his Florida mansion in which his wife had to use a golf club to break a window of their SUV and rescue him.
Woods was treated and released from a Florida hospital for cuts and bruises to his face and nose following the accident outside his luxury home, the Florida Health Central Hospital said in a statement.
"Tiger Woods was in a minor car accident outside his home last night. He was admitted, treated and released today in good condition," the hospital said.
The golfer also issued the same statement on is website adding, "We appreciate very much everyone's thoughts and well wishes."
The Florida Highway Patrol (FHP) said Woods, 33, crashed into a fire hydrant and then drove into a nearby tree after leaving his property early Friday in the Isleworth community near Windermere, a suburb of Orlando.
The accident happened at around 2:25 am, FHP spokeswoman Kim Montes told AFP.
The FHP had said earlier Woods was transported to the hospital in "serious condition." Windermere Mayor Gary Bruhn told CNN that Woods suffered "facial lacerations" in the accident.
Florida Highway Patrol spokesman Mark Welch said the confusion may have stemmed from the initial police report. "Our criteria for serious injuries might be different from that of a hospital," Welch told AFP.
Woods was out of the vehicle and semi-conscious when police arrived on scene.
His wife, Elin, told police she had to break a window of the car by using a golf club after hearing the crash from inside the house. He reportedly was bleeding from the nose and cuts to both lips.
"I believe he struck his head and his wife came out and pulled him out," Bruhn told CNN. "(Emergency personnel) were there within two minutes.
"His wife was there and Mr. Woods was on the ground. I am not going to say in and out of consciousness but he was dazed. He was bleeding from the mouth and nose."
No charges have been laid as police said they are still investigating the cause of the crash.
Bruhn said just because there is an ongoing probe doesn't mean there will be charges.
"I personally feel it was an accident," Bruhn told CNN. "I have read the police report and it says there was no alcohol involved. I think it was just a simple accident."
Superstar Woods, a 14-time major winner, had been set to play his last tournament of the year at the Chevron World Challenge at Thousand Oaks, California, December 3-6 - an event he hosts annually.
He was scheduled to hold a news conference Tuesday in California.

#Tiger Woods suffers facial cuts in car crash
You May Also like: