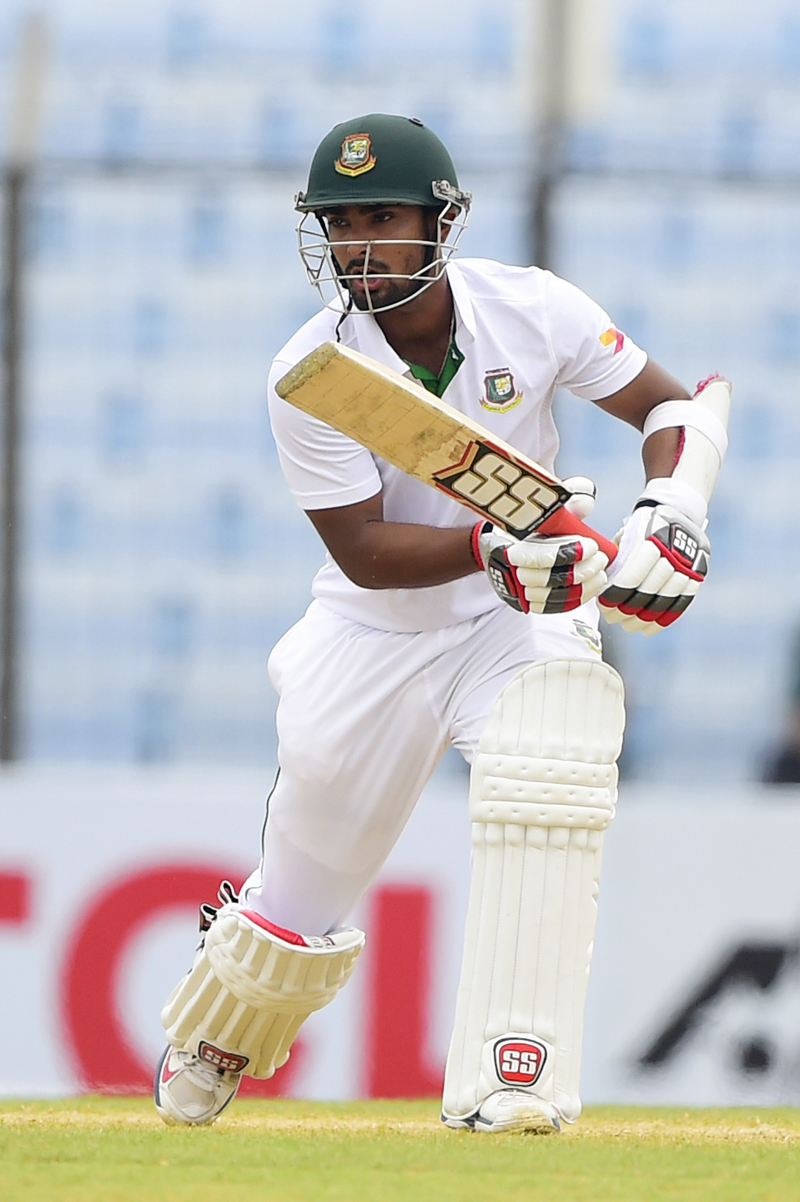 Bangladesh's Litton Das plays a shot against South Africa during the third day of their first Test match at the Zahur Ahmed Chowdhury Stadium in Chittagong on Thursday. Photo: AFP
Chittagong, July 23 Bangladesh posted their highest total against South Africa in the first Test at the Zahur Ahmed Chowdhury Stadium on Thursday, after Litton Das scored a maiden half-century and put on 82 with Shakib Al Hasan for the sixth wicket. Bangladesh took a first innings lead of 78 runs before they were all out for 326 during the extended second session of the third day’s play in Chittagong. South Africa, who made 248 in the first innings, were 61-0 in their second knock when bad light forced an early stumps with 24.5 overs left to be bowled. Openers Stiaan van Zyl was unbeaten on 33 and Dean Elgar on 28 not out. The tourists still trail by 17 runs. Fast bowler Dale Steyn finished with 3-78 as he moved closer to becoming only the second South African bowler after former captain Shaun Pollock to take 400 Test wickets. Off-spinner Simon Harmer also claimed three wickets, including the key scalps of Das and Shakib, to give South Africa a lifeline in what is shaping up to be a close contest. “I think there is still a lot of cricket to be played in this match,” Harmer said after the third day’s play. “We have lost lots of time (due) to bad light... I think we need to make sure that we set ourselves a good base tomorrow morning.” Das made 50 off 102 balls with the help of seven boundaries and tail-ender Mohammad Shahid belted 25 off 19 balls to provide Bangladesh the edge. Steyn had Mushfiqur Rahim leg-before for 28 in South Africa’s only success of the morning session, but Shakib (47) and Das stood firm to defy the visiting bowlers. Rahim, who was initially given not out before South Africa successfully reviewed the decision, added 12 runs to his overnight score. Das drove Steyn to take Bangladesh past South Africa’s first innings total and then hit JP Duminy a boundary past cover to help Bangladesh surpass their previous highest score 259 runs against South Africa. “We get a lot of loose balls in domestic cricket, but it is the opposite in international cricket,” said Das, who was playing only his second Test. “The wicket was slow. So it wasn’t easy to play shots. I had to be careful,” he said. “There is a different need every day. So today the demand of the situation was for me to play this way,” he added. Bangladesh, who have lost their previous eight Tests against South Africa, most of them by an innings margin, had made an impressive start to the match by bowling out the Proteas cheaply on the opening day. Mohammad Mahmudullah scored 67 and Tamim Iqbal added 57 in the rain-shortened second day to lay a strong foundation for the home side. The second match of the two-Test series will be played in Dhaka from July 30-August 3.

De Kock fined for nudging Tamim CHITTAGONG: South Africa wicketkeeper Quinton de Kock has been fined 75 per cent of his match fee for nudging Bangladesh opening batsman Tamim Iqbal during their opening Test at Chittagong, the International Cricket Coucil (ICC) said on Thursday. De Kock and Tamim were involved in a shoulder-barging incident at the stroke of lunch on Wednesday after an altercation and the 22-year-old South African later pleaded guilty to the charge. “As the over before lunch came to an end, Quinton de Kock walked in front of the stumps to confront Tamim Iqbal,” match referee Chris Broad said in a statement. “In doing so de Kock deliberately brushed Tamim Iqbal’s shoulder and rib area. This resulted in a heated exchange between the two, initiated by the contact made by de Kock,” he said. “This type of incident has no place on a cricket field,” Broad added.