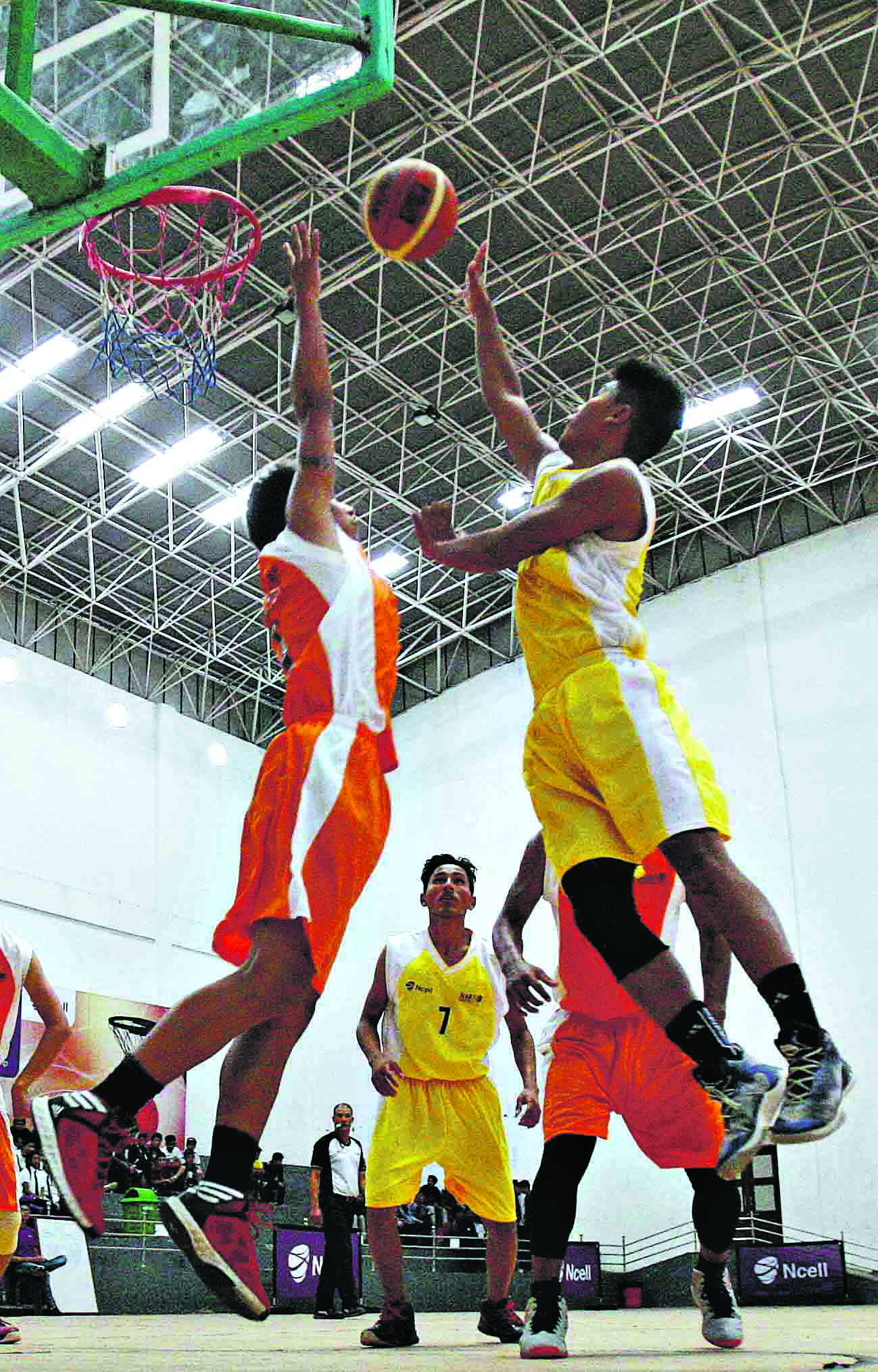 Pasang Sherpa (right) of The Times International College attempts to score while Anuj Singh(left) of Ideal Model College during the Ncell U-18 Inter College Basketball Championship at Nepali Army Sports Complex in Lalitpur on Thursday.Photo: Udipt Singh Chhetry
Lalitpur, September 3 Times, Capital College and Research Centre and Liverpool registered wins in the Ncell U-18 Inter-college Basketball Tournament here at the Army Physical Training and Sports Centre in Lagankhel on Thursday. Times defeated Ideal Model College 63-56 riding on 17 points from Pasang Sherpa. Times opened with a 11-4 lead and never trailed in the match. Ideal reduced the deficit to six points after they won the second period 16-15. Times then scored 18-17 to restore the lead by the end of third quarter and both teams netted 19 points each in the final period. Phurba Tashi Sherpa received the man-of-the-match award. In another match, CCRC College came from behind to thrash NASA International College 79-49, with Anish Magar scoring 20 points for the winning team that also earned him the player-of-the-match award. NASA took hold of the first quarter, winning it 17-15 but CCRC dominated the remaining three periods to register a victory. CCRC took the second period 22-11, while they recorded a 24-15 victory in the third quarter. CCRC dominated the final period 18-6 to complete the emphatic victory. Likewise, Liverpool International College beat Saipal Academy 52-33 riding on 19 points from Ashish Basnet. Liverpool dominated first three periods to set the foundation of their victory. Liverpool opened with a 13-11 lead in the first quarter and extended the lead to 14 points winning the second quarter 21-9. Liverpool then took the third set 14-5 before Saipal won 8-4 in the final period.A total of 16 college teams are participating in the tournament sponsored by Ncell. The top three finishers will walk away with Rs 100,000, Rs 75,000 and Rs 50,000 respectively.
#Ncell U-18 Inter-college Basketball Tournament
You May Also like: