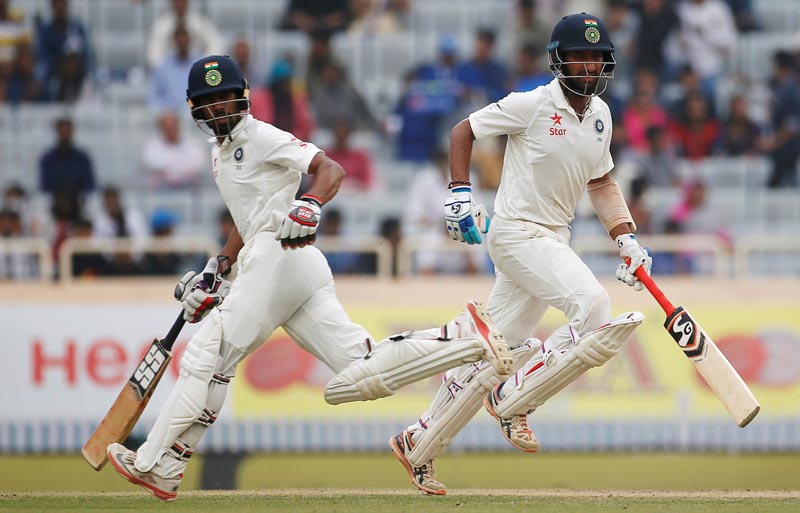 India's Cheteshwar Pujara (R) and Wriddhiman Saha run between the wickets. Photo: Reuters
RANCHI: A tireless Cheteshwar Pujara and a dogged Wriddhiman Saha frustrated Australia with a burgeoning 175-run partnership to give India a 52-run first innings lead at tea on day four of the third test on Sunday. Resuming on 360-6, the duo batted through two wicketless sessions to steer India to a series-high total of 503 for six at the interval. Pujara was batting on 190, having played the longest innings by an Indian in terms of balls faced after nearly 11 hours in the middle. The right-hander hit 20 boundaries in his dour 505-ball unbeaten knock. Wriddhiman Saha matched his doggedness at the other end and was batting on a patient 99, which included seven boundaries and a six off Nathan Lyon. Pujara's fifth 150-plus knock saw him eclipse Rahul Dravid's record of facing 495 balls during the former captain's knock of 270 in a 2004 test against Pakistan. Playing his second test more than five years after his first, Australia paceman Pat Cummins (4-89) nearly completed a five-wicket haul when Saha was given out leg-before. The batsman immediately reviewed and managed to overturn the decision after replays suggested the ball would have missed the stumps. Saha survived another review and also got a reprieve on 51 when his fellow wicketkeeper Matthew Wade spilled an edge. Pujara also used review to prolong his stay after he was given out lbw to a sharply turning Lyon delivery when on 157. This was Pujara's second century-partnership in the match as he and Saha ran Australia ragged at the Jharkhand State Cricket Association Stadium. Saha ducked well under the bouncers and often found the gap to stay on course for his third test century. Left-arm spinner O'Keefe bowled a staggering 67 overs for his one wicket, highlighting the tourists' struggle on the penultimate day. The four-test series is tied 1-1 with Dharamsala hosting the final match from Saturday.
#India #Australia #Virat Kohli #Steve Smith #Wriddhiman Saha #Cheteshwar Pujara
You May Also like: