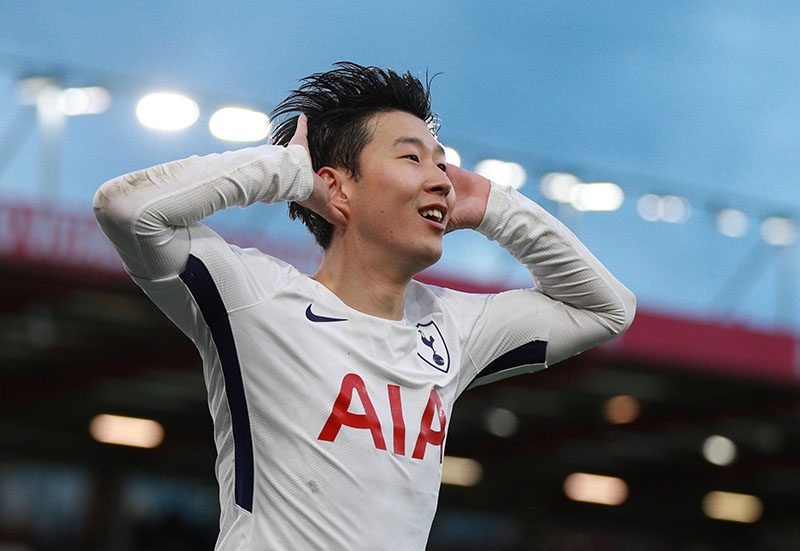 Tottenham's Son Heung-min celebrates scoring their third goal during the Premier League match between AFC Bournemouth and Tottenham Hotspur, at Vitality Stadium, in Bournemouth, Britain, on March 11, 2018. Photo: Reuters
Tottenham Hotspur overcame a worrying injury to talismanic striker Harry Kane to beat Bournemouth 4-1 with a Son Heung-min double and goals from Dele Alli and Serge Aurier to move up to third in the Premier League on Sunday. The loss of England international Kane, who went off with an ankle injury on the half-hour, took some of the gloss off a hard-won comeback victory after the disappointment of losing to Juventus in the Champions League last 16 in midweek. "It was a massive challenge after Wednesday but the team showed great character and personality," said Spurs manager Mauricio Pochettino, who added that ther top scorer Kane will have a scan to determine the severity of his injury. The win moved Spurs a point and a place above Liverpool into third with 61 points from 30 games and restored a five-point gap over fifth-placed London rivals Chelsea who they visit on April 1 in the battle for the top four Champions League spots. Spurs were flattered by the margin of victory after they fell behind during a high-octane start by Bournemouth in which Junior Stanislas hit the bar and then scored after six minutes. With Kane off, his England team mate Alli stepped into the space where the striker normally lurks to notch the equaliser in the 35th and end his barren spell of 15 games without scoring. Alli, who also later departed injured, played a major part in the second goal, crossing for Son to score with a scuffed shot before the South Korean got his seventh in four games from a late breakaway initiated by the impressive Christian Eriksen. Full back Aurier made it 4-1 late on after Bournemouth goalkeeper Asmir Begovic failed to clear his lines. Son's goals have come in a devastating 11-day spell which has contributed to what Argentine Pochettino said was the player's best-ever campaign with Spurs. "Son is having a fantastic season, the best season since he arrived," he said. "He helped the team to achieve these three points. The target is to finish as high as possible." Bournemouth manager Eddie Howe said his side were unlucky to have a Callum Wilson goal disallowed for a push in the area.
#English Premier League #Tottenham Hotspur #EPL #Bournemouth #Son Heung-Min #Harry Kane #Dele Alli #Sere Aurier
You May Also like: