Triumphant Osaka draws Serena Williams in first round at Miami 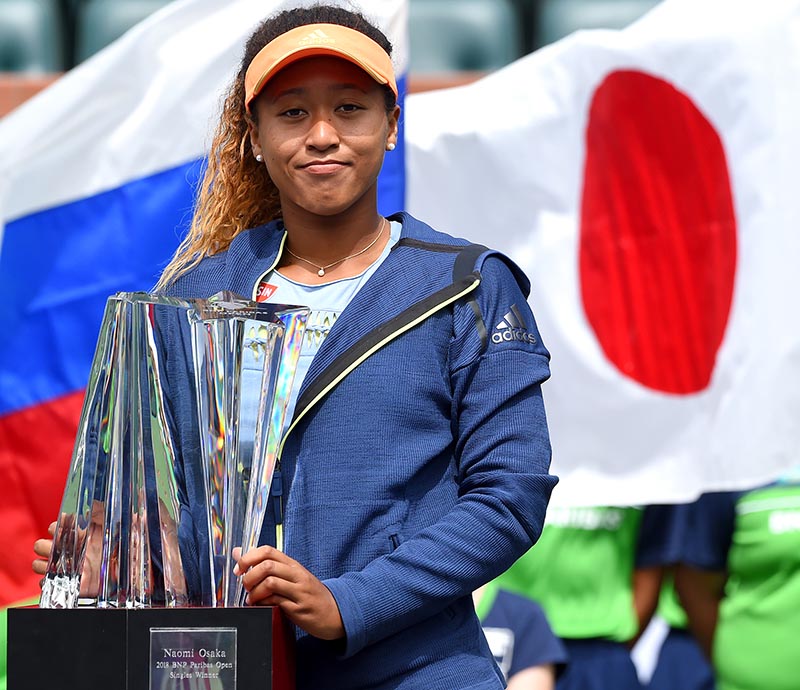 Naomi Osaka (JPN) with the championship trophy after she defeated Daria Kasatkina (not pictured) in the women's finals in the BNP Paribas Open at the Indian Wells Tennis Garden, in Indian Wells, California, USA, on March 18, 2018. Photo: Jayne Kamin-Oncea-USA TODAY Sports via Reuters
Indian Wells champion Naomi Osaka will have little time to celebrate in her first career victory with the Japanese drawing eight-time champion Serena Williams in the first round of next week's Miami Open. Osaka scored a commanding 6-3 6-2 victory over Russian Daria Kasatkina in a battle of 20-year-olds at the BNP Paribas Open at Indian Wells on Sunday. "I was extremely stressed and extremely nervous, but my plan was to fake that I'm very calm," Osaka told reporters. "I just knew that she was going to fight for every point, too, so I couldn't afford to lose points based on nerves, and I had to keep making the right decisions." Osaka had defeated former grand slam champion Maria Sharapova, fifth seed Karolina Pliskova and then world number one Simona Halep on her way to the title and the $1,340,860 first place money. "It was hard for me to get my nerves in check in the first game, especially since - I don't know why I decided to serve first," Osaka said. "We were playing some long points, and I wasn't really trying to hit hard today, because I felt like it would be better for her to take my pace. "I wanted her to do whatever she wanted to do, and I was just going to sit back and see what she does. I feel like I wasn't that aggressive today. I was just more consistent." Williams lost to sister Venus at Indian Wells in the third match of her return after having a child and is likely to face Osaka for the first time on Wednesday, the third day's play in the women's draw in Miami.
#BNP Paribas Open #Indian Wells #Naomi Osaka #Daria Kasatkina
You May Also like: