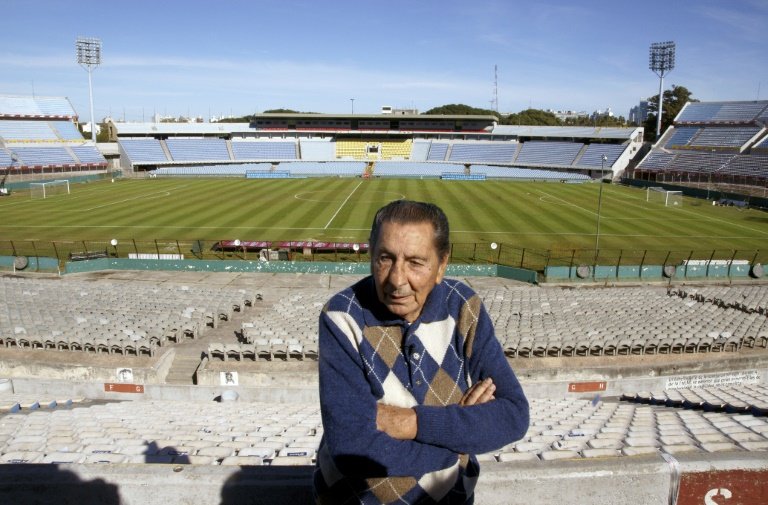 Alcides Ghiggia, the former Uruguay striker who scored the goal which won the 1950 World Cup against hosts Brazil, during an interview with AFP on May 14, 2010 at Centenario stadium in Montevideo. Photo: AFP/File
MONTEVIDEO: Alcides Ghiggia, the former Uruguay striker who scored the goal which won the 1950 World Cup against hosts Brazil, died Thursday -- 65 years to the day after his famous strike in the Maracana Stadium that traumatised a nation. Ghiggia, who was 88, died from a heart attack, his wife Beatriz confirmed to AFP. He was the last surviving member of Uruguay's 1950 World Cup-winning team. Speaking about his match-winning goal, Ghiggia once famously told Brazilian television in an interview: "Only three men have ever silenced the Maracana -- the Pope, Frank Sinatra, and me!" His second-half goal in front of 200,000 spectators in Rio de Janeiro gave Uruguay a 2-1 victory which has passed into football folklore. The defeat inflicted crushing disappointment across Brazil and still reverberates to this day, referred to simply as the "Maracanazo", a seismic national tragedy embedded in the country's cultural history. Ghiggia's goal in the final match of the tournament -- which Brazil needed only to draw to win the title -- turned its author into a revered national hero at the age of 23. - 'It's behind me' - "I remember the silence and later I felt sorry for the home supporters but the first thing I thought about when the goal went in was my family and friends, what it would mean to them," Ghiggia said in an interview with Britain's Daily Telegraph in 2014. "I kept thinking about it but now I don't feel the same emotion. I feel calmer and to be honest, don't want to think about it too much. You can't live on memories -- it's behind me." Ghiggia was also dismayed by the merciless vilification of Brazil's goalkeeper Moacir Barbosa, who had failed to stop his winning goal. Barbosa was often blamed by Brazilians for the 1950 defeat and cited as a jinx. "Many people called me a hero but I wasn't a hero, just as Barbosa was not responsible for the defeat. It was just 11 footballers against another 11, and I was lucky to score the goal. That's it." In an interview with the BBC last year, he recalled meeting Barbosa years after their fateful encounter in the Maracana. "Goalkeepers are always under-appreciated," Ghiggia said. "You can play well the whole match, but you let in a goal and they blame you. "My marker didn't stop me, why didn't they blame him? Barbosa died (in 2000) with the ingratitude of the Brazilian people." Born on December 1926, Ghiggia began his career with Uruguayan giants Penarol, before his 1950 stardom led to a move to Italian club AS Roma. He later joined AC Milan and also represented Italy, something made possible by his ancestry and eligibility regulations of the era. Ghiggia described his selection for the Azzurri as an "honor to play for a team that wasn't mine." He returned to Uruguay at the age of 37 to finish his career with Montevideo club Danubio, retiring five years later at 42.
#Uruguay #Uruguay football #1950 World Cup #Alcides Ghiggia
You May Also like: