US swimmer Lochte apologizes to Brazil on national TV 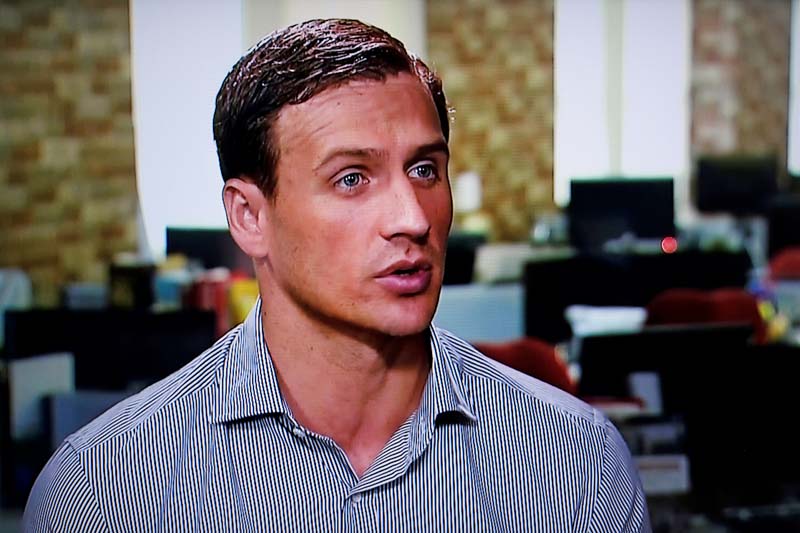 In this screen grab from video Olympic gold medallist swimmer Ryan Lochte of the US gives an interview to Globo TV at their studios in New York City, August 20, 2016. Photo Courtesy Globo TV via Reuters
RIO DE JANEIRO: US gold medalist Ryan Lochte admitted to Brazil's largest broadcaster Saturday night that he had exaggerated his story about being robbed at gunpoint in Rio - but insisted he did not lie. In an interview aired on Globo TV after the proud soccer country won its first Olympic gold in a penalty shootout, Lochte apologised to the nation. "I'm sorry," one of America's most decorated Olympic swimmers said. "Brazil doesn't deserve that." The Olympian insisted that he was a victim of extortion because he was forced by armed guards to hand over money. "I wasn't lying to a certain extent," he said. "I over-exaggerated what was happening to me." The tale of a gunpoint robbery in Rio initially embarrassed Brazil, which had suffered a series of assaults against visiting government ministers, athletes and tourists, until local police accused Lochte, 32, of making it up to cover up vandalising a gas station. Lochte's interview with the Globo TV network aired after the Brazil versus Germany game. The soccer match was expected to attract a record number of viewers, many of whom stayed on to watch Lochte speak to the nation. Excerpts of an interview with Lochte by Matt Lauer also aired on "NBC" Saturday night. In that interview, he apologised to his swimming teammates, Jimmy Feigen, 26, Jack Conger, 21, and Gunnar Bentz, 20, who police stopped from leaving Brazil over the incident. When asked what he was feeling when he saw his teammates taken off a plane and held back in Brazil, Lochte responded by saying he was "hurt." "I mean I let my team down and you know, I don't want them to think I left them out to dry," he said. He said he had waited until his teammates returned to the US before speaking again about the incident. Bentz, the youngest of the four swimmers involved, released a statement saying Lochte played the key role in the situation, tearing a poster off a wall and arguing with armed security guards at the gas station. The 20-year-old said the guards confronted them after they had urinated behind some bushes and Lochte had torn the metal-framed advertising poster from the wall. Lochte admitted to that in the interview on Saturday night. Earlier Saturday, a Brazilian judge provided another twist to the saga, suspending permission for Feigen to leave the country - even though he had already flown home. Feigen had agreed in an earlier hearing to pay a 35,000 reais ($11,000) fine for lying. Prosecutors appealed the penalty as being too low, persuading the judge to suspend the earlier ruling that had given Feigen the green light to leave. It was not immediately clear what impact the decision might have on Feigen, but his Brazilian lawyer Breno Melaragno told the O Globo newspaper in a story posted online Saturday that his client was the victim of extortion. Like Lochte, Melaragno said the armed guards at the gas station forced the four US swimmers to pay for damages instead of calling police, which, he argued, was itself a crime. "The armed (guard) signaled with his fingers that he wanted money," Melaragno said. "Regardless of the international attention that this case has had and the false testimony, I say that from a legal point of view ... the guards carried out a crime."
#Brazil #Rio Olympics #($1 = 3.21 Brazilian reais) Ryan Lochte #Olympic swimmers #Brazil versus Germany
You May Also like: