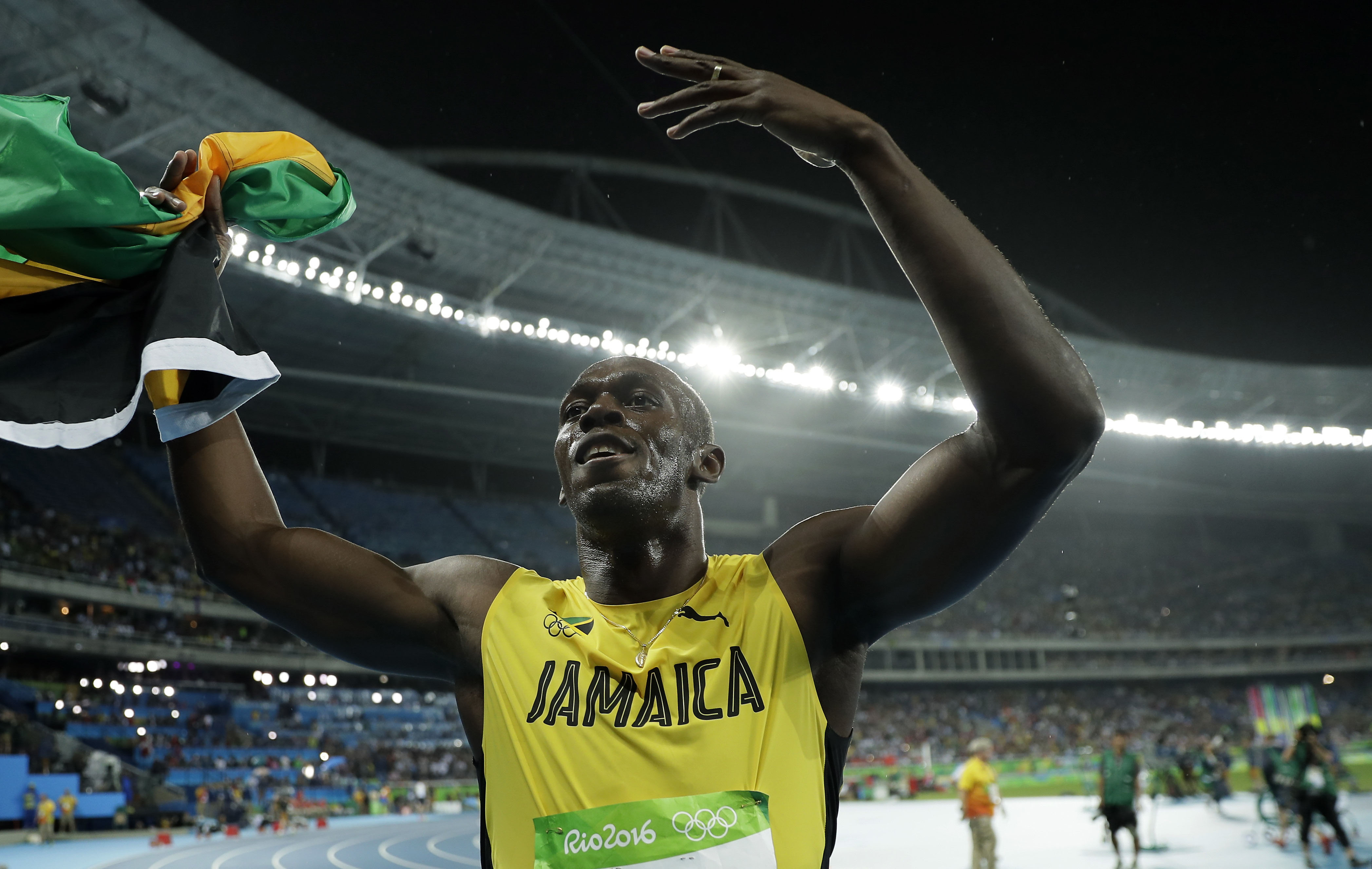 Usain Bolt from Jamaica poses for photographers with the Jamaican flag after winning the gold medal in the men's 200-meter final, during the athletics competitions of the 2016 Summer Olympics at the Olympic stadium in Rio de Janeiro, Brazil, on Thursday, August 18, 2016. Photo: AP
RIO DE JANEIRO: Usain Bolt and Ryan Lochte commanded the Olympic spotlight Thursday for drastically different reasons. Bolt completed an unprecedented third consecutive sweep of the 100- and 200-meter sprints, an accomplishment that further elevated his status as the most decorated male sprinter in Olympic history. He won the 200-meter race with a time of 19.78 seconds to defeat Andre de Grasse of Canada. He already claimed gold in the 100 in Rio. Bolt did a lengthy victory lap around the stadium, proudly carrying a Jamaican flag and even taking a selfie as he jubilantly celebrated the win in what he has long said is his favorite race. "I've proven to the world I'm the greatest," Bolt said. "This is what I came here for. That's what I'm doing. This is why I said this is my last Olympics — I can't prove anything else." For all of the Olympic fanfare surrounding Bolt's win, American swimmer Ryan Lochte and three of his teammates attracted attention for all the wrong reasons. Lochte has been in the news all week over his ever-shifting claim that he and his teammates were robbed in a taxi at gunpoint by men carrying a badge during a night of partying Sunday. Police now say the story was made up, and that the intoxicated athletes vandalized a gas station bathroom and were questioned by guards about the incident before they paid about $50 for the damage and left. The episode served as a distraction from several notable events in competition Thursday, including another haul of American medals in track and field, Jordan's first Olympic championship — in men's taekwondo — and the US women's basketball team advancing to the Summer Games final yet again. The U.S. track and field team is on a magnificent run in Rio. Americans took gold in the men's and women's 400-meter hurdles. They had a 1-2 finish in men's shot put. Ashton Eaton, largely considered the world's greatest all-around athlete, won gold in decathlon for the second straight Olympics. The feat may have garnered more attention if he weren't sharing the stage with Bolt. That's 24 medals for the United States in track and field, including eight gold. Brazil picked up two more gold medals, one in sailing and the other in beach volleyball. The men's volleyball team of Alison and Bruno set off a boisterous celebration in the rain on Copacabana Beach when they won the title match. Earlier in the day, the host country claimed gold in sailing after a dramatic finish in the women's 49erFX event. The winners tumbled into the bay as they celebrated the win. Other highlights from Day 13 of the Rio Games: Shakur for gold: No American has won a gold in boxing since 2004, but Shakur Stevenson hopes to change that. The 19-year-old phenom who was named after rapper Tupac Shakur advanced to the gold match and has the support of Floyd Mayweather, who has referred to Stevenson as "the next Floyd Mayweather." Suspensions: It was a busy day for doping suspensions. Doping officials announced that a weightlifter from Kyrgyzstan, swimmer from China, cyclist from Brazil and canoeist from Moldova all tested positive for drugs. The weightlifter was taking strychnine, best known for its use as rat poison. Athletes use it in small doses to boost muscle recovery. Still undefeated: The US women's basketball team didn't have its starting point guard, Sue Bird, in the semifinals against France after she injured her knee. They still won by 19 points. If the women beat Spain in the final Sunday, it will be six straight golds for the U.S. Birdle Fest: You know it's a good day on the golf course when a player starts losing track of the number of birdies she makes. Such was the case for Lewis, who carded 11 birdies and shot a 63. Her round could have been better if not for a double-bogey on the 14th hole. And it still wasn't enough for the lead. Inbee Park of South Korea finished shot a 5-under 66 to lead by one. Diving domination: China has dominated the Olympic diving competition, and the result in the women's 10-meter platform suggests the success might be long-lasting. Ren Qian won gold, and she is only 15 years old. BMX crashes: The BMX competition began on what many riders feared would be a treacherous course. They ended up being right. Several riders crashed in the BMX men's quarterfinals, and two-time defending gold medalist Maris Strombergs of Latvia was eliminated. All three American riders advanced to the semifinals, including Connor Fields, who summed up the day like this: "The best I can describe it is, put 800 lions in a cage, throw out a big steak and open the doors. That's BMX." Badminton: It was a significant day at badminton. Carolina Marin of Spain beat the defending Olympic champion from China to advance to the gold medal singles match. Marin is world No. 1 but her win is significant because China had been badminton's superpower, sweeping all five gold medals at the 2012 London Games. And Misaki Matsutomo and Ayaka Takahashi of Japan won gold in women's badminton doubles.
#Usain Bolt #Ryan Lochte #Rio Olympics 2016
You May Also like: