Venus in a league of her own at Wimbledon 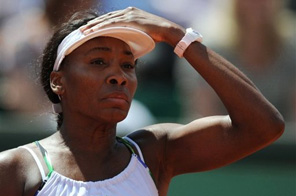 Venus Williams is to begin her defence of the Wimbledon title Source: AFP

LONDON: When Venus Williams walks onto Centre Court to begin her defence of the Wimbledon title, the American will feel the lush grass under her feet and breathe a sigh of relief.

In the 12 months since she was crowned champion at the All England Club for the fifth time, after brushing aside sister Serena in the final, the American has endured a dispiriting run of results that could easily have left her morale at a low ebb.

Winning only two minor WTA events this year represents an underwhelming effort for the former world number one, but it is the first week exits from the Australian and French Opens against the unheralded Carla Suarez Navarro and Agnes Szavay that really raised eyebrows.

Yet Venus has little to worry about now she is back on grass because few trophies can have been as aptly named as the Venus Rosewater Dish awarded to the Wimbledon womens' champion.

This is the time of year Venus relishes most. While she has never won the Australian or French Opens, Wimbledon has been a love-affair almost from first sight.

Since winning Wimbledon for the first time in 2000, the 29-year-old has reached six of the following eight finals, with four more victories to her credit.

But for Serena's two victories over her sister in the 2002 and 2003 finals, Venus would be closing on on Martina Navratilova's record of nine singles titles.

That target is still within sight however and Venus said: "That would be the ultimate. Her career spanned three decades, so I'm not sure if I have that much time.

"But if I did (play that long), I think I would definitely dream of that." Venus has another aim this year as she bids to become the first woman to win a hat-trick of Wimbledon singles' titles since Steffi Graf claimed three in a row from 1991 to 1993.

The strongest challenge to Venus's dominance is likely to come from across the breakfast table at her Wimbledon base in the leafy south-west London village.

As ever with her sister Serena, results in the lesser Tour events are no indicator of her ability to win Grand Slams, as she proved by failing to win a single tournament since January's victory at the Australian Open.

It is six years since Serena last won Wimbledon but on her day the world number two still has the beating of any of her peers - including Venus.

The same can't be said of world number one Dinara Safina, who will travel to London rocked after compatriot Svetlana Kuznetsova thrashed her in the French Open final.

Safina has risen to the top of the womens' rankings without landing a Grand Slam victory.

The 23-year-old Russian may not fancy her chances of ending that frustrating run at Wimbledon as she has yet to make it past the third round.

If Safina can't dethrone Venus, the biggest threat could come from elsewhere in eastern Europe.

Maria Sharapova, the 2004 champion, is working her way back up the rankings after returning to the Tour in May following 10 months on the sidelines with a persistent shoulder injury.

The Russian insists her desire to succeed burns as brightly as ever.

"I've always been a fighter," she said. "If I was mentally weak I wouldn't be doing this, I'd be on some island with a nice cold pina colada. But there is no better feeling than waving to the crowd after you've won." Another challenger should be Kuznetsova, whose morale is sky-high after her Roland Garros triumph, while world number four Elena Dementieva, a two-time Grand Slam finalist, reached the semi-finals last year.

There is no shortage of motivation for Serbian duo Ana Ivanovic and Jelena Jankovic, who both failed to make it past the fourth round last year despite being seeded one and two respectively, and have struggled since.

Attention will also be focued on 16-year-old Michelle Larcher de Brito, whose high-pitch on-court screeching has led the International Tennis Federation to consider making "noise hindrance" part of its code of conduct.

#Venus in a league of her own at Wimbledon
You May Also like: