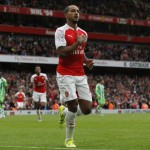 Arsenal's midfielder Theo Walcott celebrates scoring during a pre-season friendly match against Wolfsburg at The Emirates Stadium in north London on July 26, 2015. Photo:Reuter
LONDON: Arsenal stepped up their impressive preparations for the new season by winning the Emirates Cup for the first time since 2010 as Theo Walcott's strike clinched a 1-0 win over Wolfsburg on Sunday. Walcott's second half goal ensured Arsene Wenger's side took the silverware as they finished above Villarreal, who also won both their matches but had an inferior goals scored record, in the four-team pre-season tournament at their Emirates Stadium. After a swaggering 6-0 rout of Lyon on Saturday, this was a more prosaic performance from the hosts, but there was still plenty to encourage Gunners boss Wenger ahead of their Premier League opener against West Ham on August 9. Former Chelsea goalkeeper Petr Cech, the only major signing made by Wenger since the end of last season, marked his home debut with the kind of composed display that was so often missing during Arsenal's goalkeeping woes in recent years. After starting last season's FA Cup final win against Aston Villa in the central striker's role he has coveted for much of his career, Walcott's cool finish provided further evidence the winger might be ready to make a permanent transition this season. There was also a tantalising glimpse into Arsenal's future as 17-year-old French midfielder Jeff Reine-Adelaide made an eye-catching start 24 hours after an equally effervescent performance from fellow teenager Alex Iwobi. And, having already secured the Asia Trophy earlier this month, the Gunners can now clinch a hat-trick of pre-season trophies if they defeat Chelsea in the Community Shield at Wembley next Sunday. "Our technical level was good, but it was maybe less spectacular than yesterday because our final ball wasn't at the top level," Wenger said. "We gave them many more problems in the second half because we pushed up more and overall it was two good days." Despite his long spell with bitter rivals Chelsea, Cech was given a warm welcome by the Arsenal fans in his second appearance for the club. Relieved to see Wenger finally sign a world-class 'keeper, fans greeted 33-year-old Czech's first touch, comfortably holding a Kevin De Bruyne cross, with a standing ovation. Wolfsburg manager Dieter Hecking says the Bundesliga runners-up have been destabilised by speculation that Manchester City are about to make a £50 million ($77.5 million) bid for Belgium playmaker De Bruyne. But they still dominated much of the first half, working opportunities for De Bruyne, who shot well over, then former Arsenal striker Nicklas Bendtner, who narrowly failed to convert a De Bruyne cross. - Something special - Arsenal were unable to recapture the scintillating form that destroyed Lyon and Walcott wasted one of their few first half chances when he shot straight at goalkeeper Diego Benaglio from a tight angle. Wolfsburg were presented with a golden opportunity to take the lead when Timm Klose, unmarked 10 yards from goal, lashed wildly over from a deflected Andre Schurrle corner. In the end, it took a moment of inspiration from Reine-Adelaide to break the deadlock. Signed from the Lens academy last month after helping France win the European Under-17 Championships, Reine-Adelaide has been hailed by Wenger as "something special" and he showed why with a quality contribution to Walcott's 50th minute goal. A deft first touch and nimble turn took the youngster away from his marker and he advanced quickly towards the penalty area before slipping a clever pass through to Walcott, who calmly slotted past Benaglio. Aware of his potential move to rivals City, De Bruyne drew mocking jeers from the Arsenal fans when he miscued a woeful effort well over with his last contribution before being substituted. There was still time for Cech to underline why Wenger paid £11 million to prise him away from Chelsea as he blocked Ricardo Rodriguez's low drive, then got down smartly to keep out Josuha Guilavogui's effort. smg/ps
#English Premier League #Arsenal #Arsene Wenger #Aresenal FC #Theo Walcott' #Wolfsburg #Emirates Stadium #EPL clubs
You May Also like: