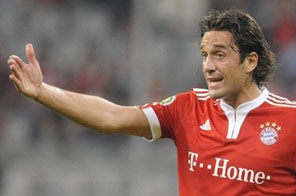 Toni earned himself a 25,000 euros fine on Wednesday for telling the Italian media his relationship with van Gaal "is as good as over" following just four league appearances since the Dutchman took over on July 1.

With his World Cup place on the line, Toni has said he wants to return to Italy during the Bundesliga's winter break in January in a bid to win back his place in the national team.

"The player has indicated he wants away. Then he must look for a club," van Gaal told German channel Sat 1 after Bayern's 1-0 win over Maccabi Haifa in the Champions League on Wednesday night.

Bayern's team manager Uli Hoeness - who was set to replace Franz Beckenbauer as president of the German giants at the club's AGM on Thursday - said Toni's behaviour must change, but is hopeful the pair can patch up their differences.

"I will try to mediate on both sides," said Hoeness.

"I think we have already got a small connection between them.

"I know we can't accept his behaviour, but on the other hand there is always the posibility for men to apologise.

"That is still pending and if that happens there is a chance between him and Louis van Gaal."

The glum-faced striker was in the stands at Munich's Allianz Arena on Wednesday next to injured French midfielder Franck Ribery, and the Italian's 24 league goals in 31 games in the 2007/08 season is now a distant memory.

#Want-away Toni can leave #says Bayern's van Gaal
You May Also like: