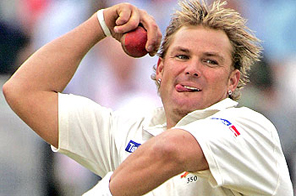 ENGLAND: Shane Warne has again urged England to play two spinners in the first Test against Australia in Cardiff and believes Adil Rashid should be one of them.
The former Australia leg-spinner has already made it known that he believes England hold an advantage over the tourists in terms of slow bowling and has now identified Rashid as the man to partner first-choice Graeme Swann.
That would mean Monty Panesar would be left out, just months after touring the Caribbean as England's number one spinner, with conditions at Sophia Gardens for the first Test starting on July 8 expected to suit the slow bowlers.
Warne said he had been impressed by the progress Yorkshire leg-spinner Rashid, 21, has made in recent seasons, highlighted by his recent performances at the World Twenty20 after he was called up to replace the injured Andrew Flintoff.
"What England have done very well is not rush Rashid," Warne said.
"They have let him learn his craft. He has been very lucky to play with (Yorkshire captain) Michael Vaughan for a limited period of time. I think he's ready now to make that step.
"He has performed very well in the limited opportunities he has had in Twenty20, which is really a spinner's game.
"I believe Rashid is ready to play Test cricket and that he should play in the first Test match with Swann.
"If I was England I would be preparing a flat wicket that turns and playing two spinners."
Should Panesar miss out it would be a dramatic fall from grace for the left-armer who has already seen Swann pass him in the pecking order following the tour of the Caribbean earlier this year.
Swann was England's leading wicket-taker in that series after claiming 19 scalps at an average of 24.05, while Panesar could manage just five wickets.
Swann was then preferred for the return two-Test series in May, when England opted for just one spinner in both matches, with Panesar relegated to county ranks.
The 27-year-old has, however, failed to impress with Northamptonshire in four-day cricket this year, taking just six wickets at an alarming average of 86.66 and while Warne believes he is a "wonderful bowler" he does not think Panesar has improved since making his Test debut in 2006.
"He's a wonderful bowler, he has been fantastic for cricket, he's exciting," Warne said.
"But he's stayed the same, he's one of those guys that has played one Test 30 times.
"You're all going to have your fluctuations in form but you want to see an improvement."

#Warne: England Should Pick Two Spinners
You May Also like: