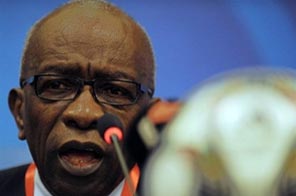 Influential FIFA heavyweight Jack Warner has thrown his support behind Australia hosting the 2018 or 2022 World Cup, saying the country has an 'excellent chance,' dismissing concerns that Australia is too far away. Source: AFP

SYDNEY: Influential FIFA heavyweight Jack Warner has thrown his support behind Australia hosting the 2018 or 2022 World Cup, saying the country has an "excellent chance".
Warner, who has publicly criticised England?s World Cup bid in recent weeks, dismissed concerns that Australia being too far away would work against it.
"Australia being allegedly 'far away' is a bit of a ridiculous statement," the FIFA executive committee member said in comments posted on the Football Federation Australia website.
"God created the world round for a reason: distance is relative to where you stand.
"And the Australian continent is nearer to two-thirds of the world's population than most other places. So what's the fuss?"
Australia is one of nine bidders for 2018, and one of 11 in the race for 2022, with the decision on both made in December 2010.
Warner said that he had visited Australia on many occasions.
"Australia created the best ever Olympics and demonstrated an ability to host and manage some of the biggest sporting events in the world with class, expertise and with a dedication to excellence," he said.
"If there is a country that truly deserves to host the FIFA World Cup, then it is the island continent of Australia".
He also pointed to Australia?s two consecutive FIFA World Cup appearances. "Just look how Australia has fared in football over the years, and now, even your neighbours, New Zealand, have qualified. What a fantastic achievement," he said.
"If you ask me, Australia has an excellent chance of succeeding with its bid."
Football Federation Australia chairman Frank Lowy has said previously that the country's prime objective was 2018, with 2022 a possible second prize.
South Africa is hosting next year's World Cup with Brazil staging the 2014 event.