Wenger relieved at Arsenal win in Milan after nightmare week 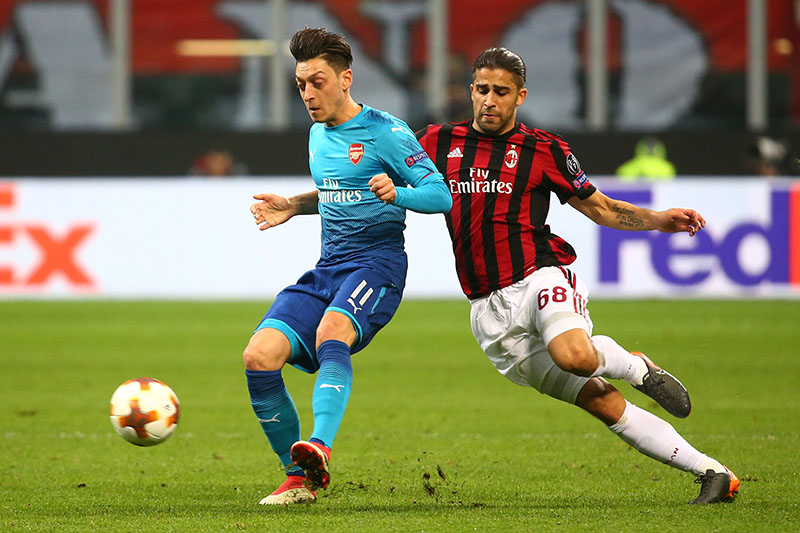 Arsenal's Mesut Ozil in action with AC Milan's Ricardo Rodriguez. Photo: Reuters
MILAN: Arsenal manager Arsene Wenger expressed his relief after his side's Europa League success at AC Milan on Thursday by describing it as an important win after a nightmare week. "I am happy with the spirit and response we gave," said the Frenchman after a 2-0 victory at San Siro in the last 16 first leg tie ended a run of four successive defeats. “We were not in a position to take risks, but we could not be too cautious as you lose fluidity. We defended with resilience until the end," he said. "When you are knocked down like a boxer, you don’t have time to react and you are only halfway up, but you have to respond. Your pride and desire to show quality has to come through in the game. "It is an important win of course after we had a nightmare week," added Wenger, whose side came to Milan after losing to Premier League leaders Manchester City -- who also beat them in last month's League Cup final -- and Brighton & Hove Albion. Arsenal's Germany midfielder Mesut Ozil described the win in Milan as "our best away performance for some time", while Aaron Ramsey, scorer of the second goal, called it a "great response." Arsenal are 13 points adrift of the Champions League places in the Premier League and are pinning their hopes on winning the Europa League to qualify for Europe's elite club competition. Not surprisingly, Milan coach Gennaro Gattuso was far from happy after seeing his team's 13-match unbeaten run end. "We made too many mistakes," he said. "We never played as a compact team and they deserved the win. "Every time they attacked, they could have scored. Playing at this level is something new for our lads but there were too many mistakes," he added. However, the famously fiery coach refused to throw in the towel in the tie. "In football, you never say never," he said. "We'll go to London to try and win, we're not going on an excursion. This is Milan and there is a shirt we have to respect."
#Arsenal #Europa league #English Premier Leauge
You May Also like: