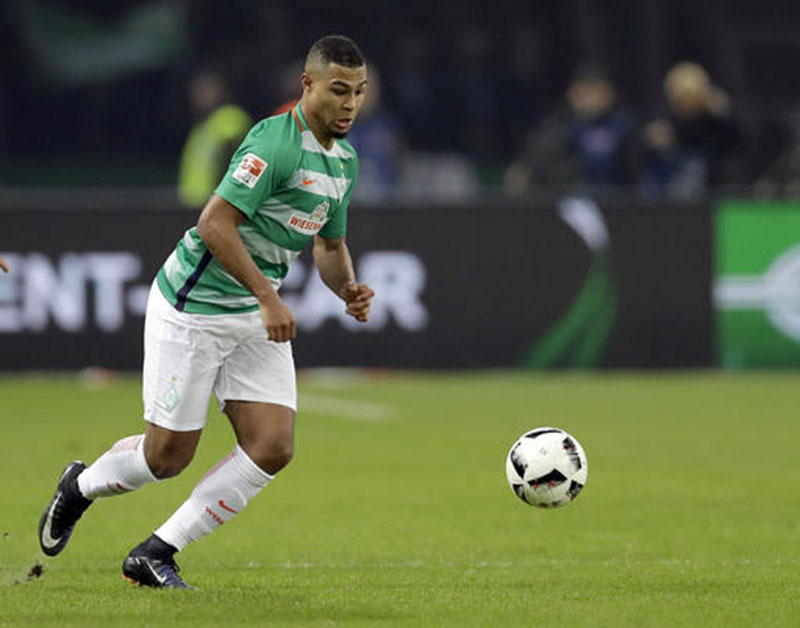 Werder Bremen's Serge Gnabry plays the ball during the German Bundesliga soccer match between Hertha BSC Berlin and SV Werder Bremen in Berlin, Germany, on December 10, 2016. Photo: AP
WOLFSBURG: Midfielder Serge Gnabry scored twice as Werder Bremen moved away from the Bundesliga's relegation zone with a 2-1 win at fellow struggler Wolfsburg on Friday. Bremen and Wolfsburg are level on points and two above Hamburger SV, which is in 18th place and in the relegation zone. It was a fifth defeat in six games for Wolfsburg coach Valerien Ismael, who won the league and cup double as a player with Bremen in 2004. Gnabry fired the visitors ahead with a deflected shot in the 10th minute and made it 2-0 eight minutes later, controlling the ball with his chest before prodding home on the volley. Striker Borja Mayoral, who is on loan from Real Madrid, scored with his chest following a Wolfsburg corner as Wolfsburg hit back moments later. Midfielder Daniel Didavi struck the post with a free kick as Wolfsburg kept pushing for an equaliser.
#Bundesliga #Werder Bremen #Wolfsburg #Bremen #German soccer #Serge Gnabry
You May Also like: