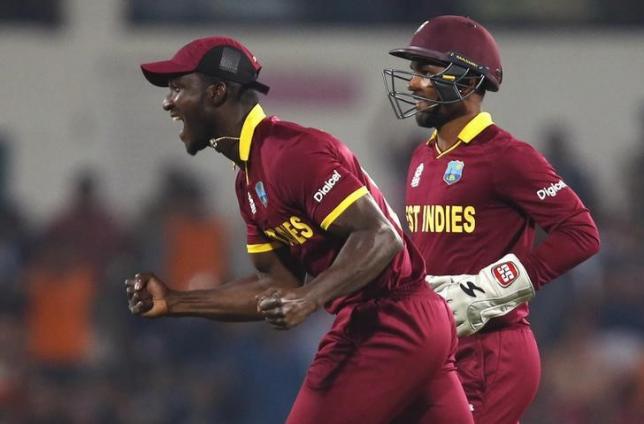 West Indies captain Darren Sammy (L) and wicketkeeper Denesh Ramdin celebrate the dismissal of South Africa's Hashim Amla. REUTERS
KOLKATA: West Indies skipper Darren Sammy has an uncomplicated approach to cricket and the affable all-rounder had a typically nonchalant view of the 22-yard pitch on which his team will face England in Sunday's World Twenty20 final. "Just want a 22-yard long wicket and six feet wide," the 32-year-old told reporters at Eden Gardens on Saturday. "Whatever they give us, we'll play on. It's a final. (I) haven't had a look at the wicket, will see it today during practice," the easy-going 32-year-old Saint Lucian said. Sammy's casual attitude is even more remarkable considering he is bidding to become the first captain to lead his country to a second World Twenty20 title. His English counterpart Eoin Morgan was apprehensive about the nature of pitch number seven at Eden Gardens which showed a tinge of green. Should the grass be cut overnight and the wicket looks to be a rank turner on the morning of the match, Morgan might consider giving left-arm spinner Liam Dawson his England debut in the World Cup final. "Absolutely. He's bowled brilliantly, he was not in the squad in South Africa but he travelled around with the side since he's been here," Morgan said. "I think he's come on a hell of a lot. We'd have no issues giving him a debut if that was the right way to go." Adil Rashid and Moeen Ali have shouldered England's spin burden in the tournament, claiming nine wickets between them.
#West Indies #World Twenty20 #Darren Sammy
You May Also like: