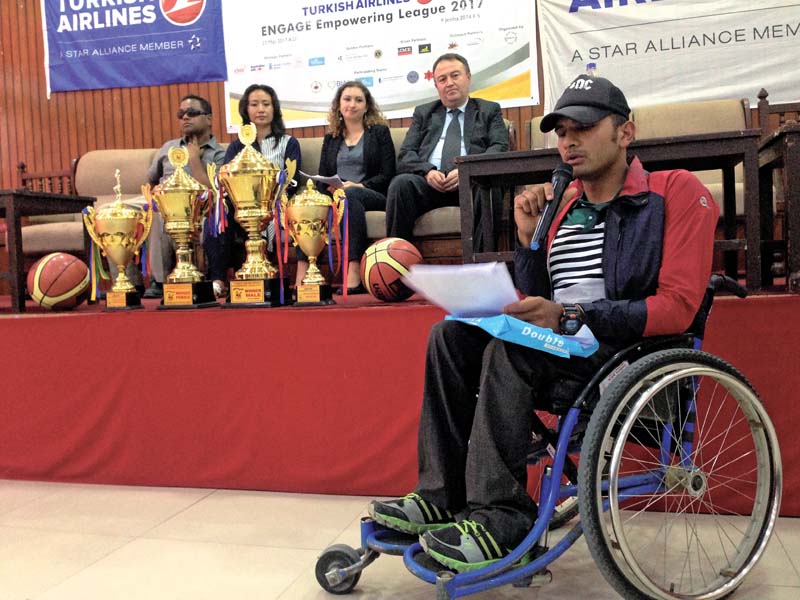 Programme Coordinator at ENGAGE Bharat BC speaks as other officials look on during a press meet in Kathmandu on Tuesday. Photo: THT
Kathmandu, May 23 ENGAGE, a not-for-profit organisation promoting social inclusion in Nepal, is organising the second edition of the Turkish Airlines ENGAGE Empowering League from May 27. The premier wheelchair basketball tournament features 10 teams — six in men’s sections and four in women’s category. The participating teams will play against each other at various college and school courts and top four will make it to the semi-finals, informed the organisers at a press meet today. Wheelchair Sports Association, Bodhisattva International, Nepal Spinal Cord Injury Sports Association and Jawalakhel Wheelchair Sports Club will compete in both the categories of the month-long tournament, while Spinal Injury Rehabilitation Centre and Tribhuvan Army Club are the two other sides in men’s section. Top three teams will receive Rs 20,000, Rs 16,000 and Rs 12,000 in men’s section, while winners in women’s category earn Rs 16,000, Rs 12,000 and Rs 8,000 respectively. Likewise, the Most Valuable Players will get Rs 5,000, while the highest scorers receive Rs 3,500 apiece. Turkish Airlines is the main sponsor of the tournament, which is also supported by the Government of Nepal, Embassy of Switzerland, NSCISA, CBM, MSI & SPN, AYON, the Duke of Edinburgh International Awards, Lions Club International, IME Group, D-Lifestyles, Civil Bank and Hero. Abdulla Tuncer Kececi, General Manager of Turkish Airlines in Nepal — which is supporting the events through its ‘Widen Your Hearts’ campaign — said the event needed the support from all the stakeholders of the society. “Being a part of this event in an honour for us as we are trying to be a part of this community,” said Kececi. “We did it last year and we are doing it this year. But the most important thing is to make it happen next year,” he added. Sabine Piccard, Associate Expert at the Embassy of Switzerland in Nepal, said the event would create opportunity for the wheelchair basketball players. “Apart from creating opportunities, the event also raises awareness and helps the players develop new skills. And it is also the platform where the players can interact among them and others as well,” Piccard said. Pawan Ghimire, President of Cricket Association of Blind, Nepal was also present at the programme as a guest of honour.
#Nepal #Wheelchair Basketball Tournament #wheelchair basketball league #ENGAGE #Nepal Spinal Cord Injury Sports Association #Cricket Association of Blind #Turkish Airlines ENGAGE Empowering League #Wheelchair Sports Association #Bodhisattva International #JawalaKhel Wheelchair Sports Club
You May Also like: