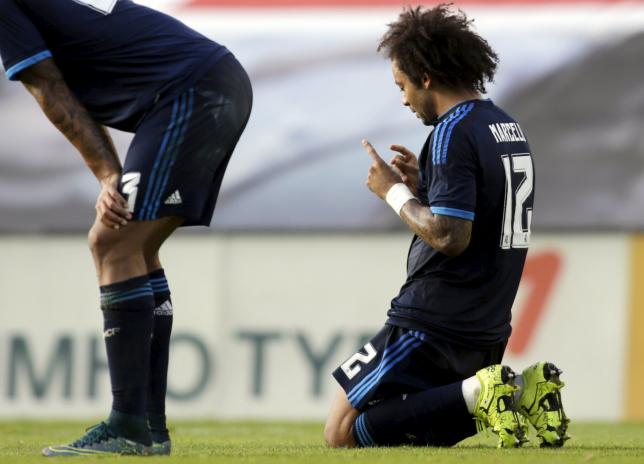 Real Madrid's Marcelo Vieira celebrates his goal against Celta Vigo during their Spanish first division soccer match at Balaidos stadium in Vigo, Spain October 24, 2015. REUTERS
Real Madrid's hopes of an 11th European title were left hanging by a thread as they slumped to a shock 2-0 loss at Germany's Champions League novices VfL Wolfsburg in their quarter-final first leg on Wednesday. The Germans were celebrating a memorable last-eight debut after Ricardo Rodriguez's penalty in the 18th minute and Maximilian Arnold's strike in the 25th stunned the visitors only four days after their 'Clasico' win in Spain over Barcelona. Despite making just one change to the lineup that started against Barca, Real coach Zinedine Zidane's team will now go into the return leg in Madrid next Tuesday with a clear disadvantage. The Germans, last season's Bundesliga runners-up who had scored only one goal in their last three matches, were more aggressive than the Spaniards and used their chances extremely well. "You have to bring that energy if you want to win," said Wolfsburg coach Dieter Hecking. "I was laughed at when I said yesterday that we may have a chance. Real had their opportunities early on and we were a bit lucky. "We pulled together, we found the spaces and played very well. Now we will go to Madrid, knowing that we have a chance to advance." The Spaniards, who saw Karim Benzema limp off with a foot injury in the 40th minute, enjoyed a strong start but never recovered from the quick two-goal punch and were lucky not to have conceded a third in the second half. "I am very disappointed. We had imagined it completely differently," said Real midfielder Toni Kroos. ""We started well, had a big chance early on. We did not underestimate them but struggled after those two goals. We had too little movement." The Spaniards needed only 90 seconds to put the ball in the net but Cristiano Ronaldo's effort was ruled offside. They kept up the pressure and Frenchman Benzema came close minutes later when his shot was blocked by Wolfsburg's Diego Benaglio. But it was the hosts who struck first after being awarded a penalty when Andre Schuerrle went down in the box in a challenge with Casemiro. Swiss international Rodriguez sent Keylor Navas the wrong way before Wolfsburg struck again seven minutes later with Arnold sliding in to complete a superb passing move that left the Real backline dazed. Things got even worse for the Spanish side as Benzema was taken off minutes before the break and Real struggled to develop any traction in their attacking game in the second half. "I think it was the first half the caused us problems," said Real coach Zinedine Zidane. "We were not concentrated enough. We did it better in the second half but we did not score." Champions League top scorer Ronaldo was rarely left without two players marking him and he was also denied by Benaglio in their one-on-one in the 70th as Real grew more desperate, pouring forward in search of a goal. Wolfsburg kept threatening to extend their lead and although Schuerrle twice failed to score despite racing clear, it did not prevent the Germans from condemning Real to their first defeat this season in the competition.
#Champions League #Real Madrid #VfL Wolfsburg
You May Also like: