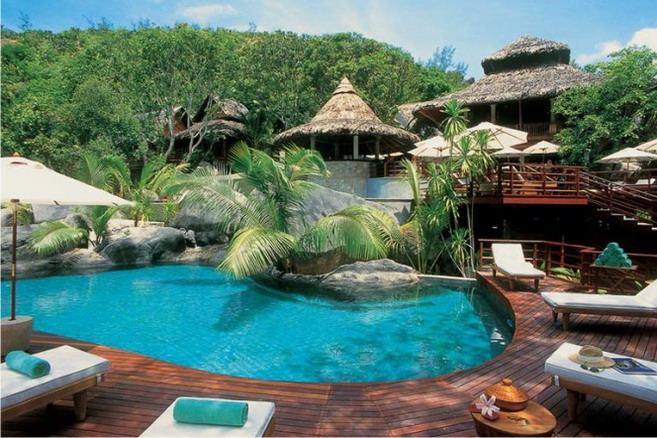 The vibrant mix of Indian, African, Asian and European influences is one of Mauritius’s biggest charms. Catholic churches sit next to Hindu temples, tea is served with samosas, and English, Creole and Cantonese are widely spoken. One of the island’s most spectacular sights is the giant Shiva statue towering over the road at Grand Bassin, a sacred lake dotted with temples. Try to catch a performance of séga, the island’s traditional dance originating from Africa.

Mauritius may be small but each of its coasts has its own personality. The west is the calmest, with little of Mauritius’s famous wind. Venture south for hidden, rocky coves or east if windsurfing is your thing. All beaches are public so you can easily hop from one inviting stretch to the next. Blue Bay is a protected marine park with first-rate snorkeling; Trou aux Biches is picture-postcard perfect; Mont Choisy in the north is a long, curving bay backed with casuarina trees; while lively Flic-en-Flac, with its beachfront bars, is a great spot for sun downers.

There are some fascinating chapters of Mauritius’s past to explore. Eureka House is a Creole mansion turned museum, giving a glimpse into the daily life of a sugar plantation in the 1800s. In Port Louis there’s an ancient dodo skeleton in the natural history museum – the flightless dodo only lived on Mauritius – and the Blue Penny Museum is ostensibly dedicated to stamps but also offers an overview of the island’s history through its art. While in town, don’t miss Aapravasi Ghat, a Unesco world heritage site that tells the moving story of the British government’s “Great Experiment”, sending indentured laborers from India to replace the slaves working in the island’s sugar plantations.

Mauritius’s volcanic interior reveals a very different side to this tropical island, with its rainforest-clad gorges and plunging waterfalls. Do not miss the Seven Colored Earths at Chamarel, a Mars-like landscape of multi colored sands that mysteriously never mix or wash away.

Snap up everything from designer bargains at the duty-free shops in Port Louis, the island’s capital, to handmade textiles and locally grown tea at one of the many outdoor markets – Flacq is particularly good. The food section of Port Louis’ Central Market is a must to truly appreciate the huge variety of fresh produce grown here.

Mauritius’s unique cultural mix finds its ultimate expression in the island’s cuisine. Ask for a typical local dish and you might get curry, stir-fry, wild boar or even a traditional afternoon tea. You can dine to Michelin-star standard at the resorts or nibble your way around street food stalls in Port Louis; stop off at a roadside kiosk for tamarind-spiced pineapple and rotis or have a lobster dinner cooked by a celebrity chef.

The presence of so many leading five-star hotels means an enviable spa scene thrives here. Look out for treatments that incorporate local ingredients such as sugar, vanilla and coconut. Nira Spa at Shanti Maurice is regularly voted one of the world’s best, and the island also has its own spa brand, Seven Colour.

Bored of the sunlounger? Head inland to go zip lining, quad biking and hiking through the rainforest, or canyoning in the waterfalls. Or take to the water – every kind of ocean-based sport is available.

Pack a picnic and catch a boat from Trou d’Eau Douce to Ile aux Cerfs, an uninhabited island just off the coast of Mauritius that’s popular with day tripping locals for its pristine beaches and crystal waters. Or visit the nature reserve of Ile aux Aigrettes, home to many indigenous species of flora and fauna now under threat.

Nile crocodiles, giant tortoises and even lions roam in Mauritius’s nature reserves. Visit the island’s forests for a chance to see the rare pink pigeon and the Mauritius kestrel in the wild. Take a boat trip to Tamarin Bay to spot the pods of dolphins that play in the waters here.

Visa is provided on arrival