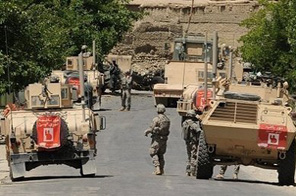 US soldiers stand guard at the site of a bomb attack in Kapisa province northeast of Bagram air base in May. Source: AFP

The convoy was initially hit by a blast that killed one security guard on Tuesday, said police chief Azizullah Wardak of Paktia province.

A second improvised explosive device then ripped through the convoy and killed nine guards in another vehicle in Paktia's Chamkani district, Wardak said.

The guards were based with U.S. troops in the area. It was unclear what security company they were working for, or if they were traveling with American forces.

The attack in the country's east came as 11 Taliban militants were killed in a joint operation by coalition and Afghan troops in southern Afghanistan.

Coalition and Afghan troops attacked the militants in a compound Tuesday night in southern Zabul province, said police chief Abdul Rahman Sarjang. No coalition or Afghan forces were killed or wounded in the operation, he said.

In a separate incident, a roadside bomb killed a soldier in the NATO-led force on Tuesday, the alliance said. No other details, including the soldier's nationality, were released.

Militants have stepped up attacks across Afghanistan. President Barack Obama's administration has ordered 21,000 new U.S. troops to join the fight in a hope of reversing the Taliban gains.

An Associated Press tally that found U.S. deaths in Afghanistan have risen to 65 so far this year, up from 36 over the first five months of 2008 — though U.S. and coalition troops have also killed hundreds more militants.

As newly arriving Marines enter violent Afghan south — the spiritual home of the Taliban and the country's major drug-producing region — the military said Tuesday that U.S. deaths will likely increase even further this summer.