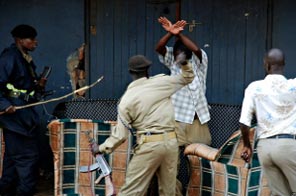 Ugandan police beat a man during disturbances in the Natete suburb of Kampala on September 11, 2009. Source: AFP

KAMPALA: At least 11 people were killed in the violent protests that erupted this week in Kampala, the head of the main hospital in Uganda's capital, Iga Matovu, said Saturday.
Five died on Thursday, and six on Friday, when police clashed with supporters of Ronald Muwenda Mutebi, the kabaka or traditional ruler of the Baganda tribe, said Matovu, acting director of the National Referral Hospital.
An earlier police toll put the number of dead at five.
Some were killed by bullets and others appeared to have been "been hit by demonstrators," the doctor said, adding that more than 30 people were admitted to the hospital on Friday with serious injuries.
The death toll could still rise, he warned.
"By yesterday evening, we had admitted over 30 seriously injured. Twelve are still in critical condition, but we hope they will be out of danger because our staff are working round the clock to save the situation," he said.
A statement from the Kingdom of Buganda -- which represents the majority ethnic group in central Uganda -- said an event that its politically influentual leader was supposed to attend Saturday has been called off.
Kampala on Thursday was the scene of running battles between protestors -- angry at government efforts to stop the kabaka from visiting an area northeast of the capital -- and police who fired tear gas and live ammunition.
Friday saw more sporadic trouble on the outskirts of the capital, with protestors lighting bonfires and setting up barricades.
Police spokeswoman Judith Nabakooba said 65 people had been arrested in connection with the Kampala riots, adding: "We hope that once screening is completed, we will take some to court."