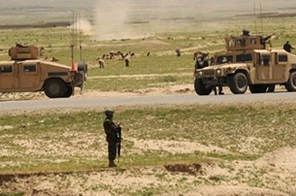 KABUL: A suicide bomb tore through a southern Afghan town killing six security guards on Wednesday while a British soldier and 20 militants died in fighting linked to a growing Islamist insurgency.

The bomber, who was riding a motorbike, blew himself up alongside guards from a private Afghan company escorting a convoy of logistics for international troops, police said.

The attack was near a bazaar in Spin Boldak, a town on a key border-crossing with Pakistan through which most of the supplies to foreign forces arrive.

In April, militants vowed to step up their attacks on Afghan and Western security forces who are trying to stem the Islamist insurgency, as well as other targets.

Fighting has escalated across Afghanistan, where at least a dozen people, including insurgents, have been reported killed almost daily in past weeks.

The violence has raised concerns about stability ahead of key presidential and provincial elections on August 20 for which Western countries have pledged thousands more troops.

The British Ministry of Defence announced that one of its troops serving with the NATO-led International Security Assistance Force was killed in a bomb attack in the southern province of Helmand on Tuesday.

Elsewhere in the south, police reported that Taliban rebels ambushed a convoy of Afghan and foreign security forces in the province of Zabul late Tuesday, sparking a battle that left 11 insurgents dead.

The bodies of the men were left at the site of the clash, near the provincial capital of Qalat, Zabul police chief Abdur Rahman Sarjang told AFP.

The Afghan interior ministry said another three militants were killed in a clash in Zabul's Shah Joy district earlier Tuesday.

The Afghan army commander for the south said six Taliban were killed in a gunfight outside the southern city of Kandahar late Tuesday.

Afghan security forces surrounded a group of 30 Taliban, General Shair Mohammad Zazai said. "Most of the militants managed to flee but six Taliban dead bodies are still lying on the battlefield," he said.

The Taliban were in government in Afghanistan from 1996 until 2001, when they were ousted in a US-led invasion for sheltering Al-Qaeda after the September 11 attacks on the United States.

The extremists were able to regroup, some in sanctuaries across the border in Pakistan, to launch an insurgency that last year reached its deadliest with an estimated 2,200 civilians and 5,000 militants killed.