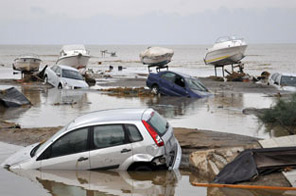 ISTANBUL: Record floods left at least 31 people dead and large parts of Istanbul under water on Wednesday as desperate motorists caught in flash floods clambered up trees to save themselves from drowning.

Turkey's Interior Minister Besir Atalay expressed fear that the death toll may rise as the waters began receding from large swathes of the city after several hours of flash flooding triggered by record rainfall overnight.

"Twenty-four people have died in Istanbul and seven others" in the province of Tekirdag, to the west of Istanbul, Atalay told a press conference here.

The biggest loss of life occurred in Istanbul on Wednesday where 21 people died in the European quarter of the city straddling the Bosphorus Strait, a day after three people lost their lives in outlying western suburbs.

Istanbul governor Muammer Guler had said earlier in the day that eight people were still unaccounted for.

Prime Minister Recep Tayyip Erdogan was expected to fly to Istanbul to observe the damage of the disaster which officials and experts blamed on both record rainfall and the unplanned urbanization of the city which saw buildings constructed on river beds.

After hours of pounding rain described by Environment Minister Veysel Eroglu as the "worst in 500 years", the flood waters gushed through streets of Istanbul, washing away parked vehicles and swamping houses.

Several motorists were stranded as a major highway connecting the city to the international airport was inundated, with water levels rising to two meters (six feet) in some sections.

Motorists could be seen clambering on to the roof of their stalled vehicles waiting to be rescued, while others climbed up trees.

Rescuers recovered 13 bodies at a truck park in the district of Basaksehir, one of the worst affected areas, the NTV news channel reported.

Anatolia quoted survivors as saying that the flood waters came while the truck drivers were asleep in their vehicles, raising the water level to five meters in 10 minutes and giving them little chance to run to higher ground.

Once the flood waters receded, the park was left under a thick layer of mud with trucks toppled over on the sides or piled on top of each other.

In the neighbouring district of Halkali, seven women drowned when they were swept away by the flood as they tried to get out of their stranded minibus taking them to work at a textile factory, Guler explained.

"The minibus was right at the front of the factory. It was hit by water coming from both sides. Those at the front managed to get out, but those at the back could not," the governor said.

The Istanbul mayor's office said more than 1,000 people had been rescued since Tuesday.

Anatolia said there were incidents of looting in some shops in areas affected by the flood where people were walking away with dinner sets, irons and electric kettles.

Officials said it was too early to say how much damage the flooding had caused in Istanbul, but insurers put the damage between 70 to 150 million dollars (48 to 103 million euros).

The interior minister pledged that the state would compensate Istanbul residents, while the Red Crescent said it had dispatched tents, blankets, food and personnel to both Istanbul and Tekirdag to help survivors.

The Greek ambassador told Turkish officials that Athens, a traditional rival of Ankara, was "ready to send any kind of aid", Greece's foreign ministry said.

Istanbul and its more than 12 million inhabitants are especially vulnerable to flooding due to poor and dilapidated infrastructure.

Weather forecasters on Wednesday issued a flood alert for the Asian parts of Istanbul, several provinces in the northwest and the Black Sea, warning that a new front of heavy rain was expected on Friday.

#31 dead as record floods deluge Istanbul
You May Also like: