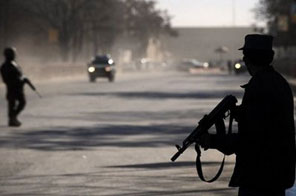 Afghan policemen on guard in Kabul on January 18. Four policemen were shot dead in southern Afghanistan on Tuesday, an official said, suggesting the killings were carried out by Taliban insurgents. Source: AFP

The attack occurred about 2 a.m. at a checkpoint near the Information and Cultural Affairs Ministry's directorate in Lashkar Gah, the capital of Helmand province, an area expected to be a major focus of fighting with the influx of 37,000 additional U.S. and NATO forces.

Daoud Ahmadi, a spokesman for the provincial governor, said it's not clear who killed the officers. He said the policemen apparently had visitors and an investigation was under way into whether the attack was political or personal.

Afghan President Hamid Karzai said Monday that he will press for the removal of some Taliban figures from a U.N. sanctions list and seek support for a reconciliation plan.

Karzai, speaking in Turkey ahead of Thursday's international conference on Afghanistan to be held in London, said the U.S. and Europe back his plan to reconcile militants who are not aligned with al-Qaida or other terrorist groups.

British officials said that international funding for Karzai's program is expected to be agreed to at the London meeting, but did not offer specifics on the likely amount to be pledged.