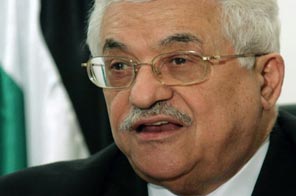 ABU DHABI : Palestinian President Mahmud Abbas on Saturday demanded a total Israeli freeze on new settlements after he held a fruitless meeting with US Secretary of State Hillary Clinton in Abu Dhabi.

"Israel should honour its obligations especially with regards to the total halt on the settlements," Abbas told reporters, adding that no breakthrough was reached in the meeting.

"The problem with the Israeli government is that it refuses to stop building settlements" in the West Bank and East Jerusalem, he said.

Chief Palestinian negotiator Saeb Erakat said: "The American delegation informed us of the Israeli position that refuses... a halt of construction of settlements."

"The gap between us was very deep and is widening even more," he admitted, adding that the meeting was "frank and difficult."

Erakat said Abbas told Clinton the Palestinians will not agree to re-launch peace talks with Israel without a complete freeze of Jewish settlements.

Abbas rejected the request from Clinton because a deal reached between US Middle East envoy George Mitchell, who was also in Abu Dhabi for the talks, and Israel "does not include a complete freeze of settlement activities," Erakat said.

Clinton met Abbas in the United Arab Emirates before heading later to Israel for talks with Prime Minister Benjamin Netanyahu.

Israeli officials declined to comment on Abbas's rejection until after the meeting on Saturday night between Clinton and Netanyahu.

Abbas said the construction of settlements, including in East Jerusalem, is blocking all prospects for launching the peace process that has been stalled for almost a year.

The situation has become complicated after the intensification of Jewish building work in East Jerusalem, he said.

"The question (of Jerusalem) was at the centre of discussions with Mrs Clinton," he said, adding that "Jerusalem is in threatened" and "peace starts in Jerusalem".

"Without Jerusalem, there will be no point in peace," he warned, saying that "the American administration in addition to being a mediator has to press Israel (to respect) its commitments" including in Jerusalem "whose annexation is not recognised by the United Nations nor the international community".

Obama has made the issue a cornerstone of his foreign policy, and cajoled Netanyahu and Abbas into joining him at a summit last month in New York.

The US president has been trying in vain to get Netanyahu's hawkish government to agree a complete freeze on Jewish settlement expansion and it has also been attempting to convince Arab states to make conciliatory gestures towards Israel.

Despite the efforts of Obama, Clinton and Mitchell, the administration has yet to see any breakthrough in efforts to resolve the decades-old conflict.