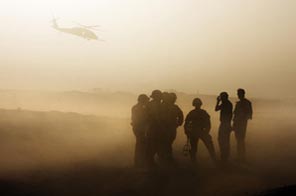 KABUL: Five British soldiers were killed in a shooting in the southern Afghan province of Helmand, Britain's defense ministry said Wednesday, in an attack Afghan authorities said was carried out by an Afghan policeman.
Tuesday's attack occurred in the Nad-e-Ali district of the country's volatile Helmand Province, and brings the number of British forces personnel who have died in Afghanistan to 229.
A Helmand police official said the attacker was a policeman. NATOsaid the soldiers had been at an Afghan police checkpoint when an individual picked up his weapon and began firing. The alliance said the attacker's motives were unclear, and that the incident was being investigated by Afghan authorities and Britain's Royal Military Police.
"The death of five brave soldiers in a single incident is a terrible loss," British Prime Minister Gordon Brownsaid.
"They fought to make Afghanistan more secure, but above all to make Britain safer from the terrorism and extremism which continues to threaten us from the border areas of Afghanistan and Pakistan," he said.
Brown insisted he remained committed to ensuring his country's troops had "the best possible support and equipment — and the right strategy, backed by our international partners, and by a new Afghan government ready to play its part in confronting the challenges Afghanistan faces."
Speaking to reporters in Kabul, former Foreign Minister Abdullah Abdullah, who was the main challenger toPresident Hamid Karzai in Afghanistan's recent fraud-marred election, expressed condolences to the soldiers' families.
He went on to criticize the Karzai administration, saying that even after eight years of international forces working to stabilize the nation, more military assistance was needed.

#Afghan cop kills 5 British troops
You May Also like: