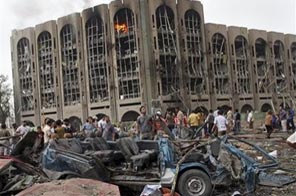 Iraqis gather at the site of a massive bomb attack at the Ministry of Justice in Baghdad, Iraq, Sunday, Oct. 25, 2009. Iraq police say that a pair of powerful explosions rocked downtown Baghdad. The blasts went off in front of the headquarters of the Baghdad provincial administration and near the Ministry of Justice building during the morning rush hour as people headed to work. Source: AP

BAGHDAD: Al-Qaida's umbrella group in Iraq has claimed responsibility for the twin suicide bombings in Baghdad that killed at least 155 people this week.

The group, known as the Islamic State of Iraq, says in a statement posted on the Internet that its "martyrs ... targeted the dens of infidelity."

The authenticity of the statement, posted late Monday on a Web site commonly used for militant messaging, could not be independently confirmed.

The same group also claimed responsibility for August bombings of two government ministries in Baghdad, when more than 100 people were killed.