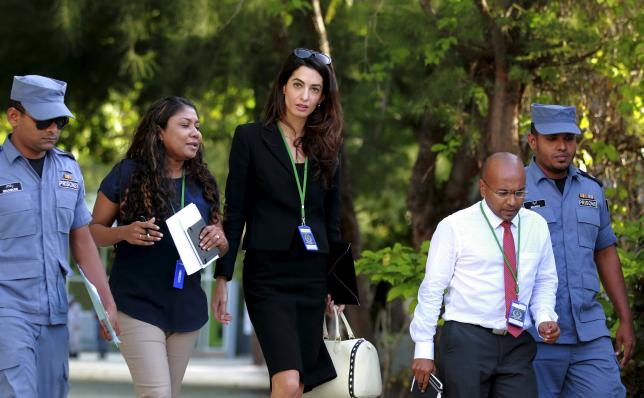 Amal Clooney (centre), lawyer of former Maldives president Mohamed Nasheed, leaves Maafushi prison after meeting Nasheed in the Maldives September 8, 2015. Photo: Reuters
MAAFUSHI: International human rights lawyer Amal Clooney met the jailed former president of the Maldives, Mohamed Nasheed, who was convicted of terrorism in a case that has drawn international criticism, a day before a key High Court hearing. Nasheed, the Maldives' first democratically elected leader, was ousted in 2012 for ordering the arrest of a judge. He is a serving a 13-year jail term after a rapid trial in March. The United Nations, the United States, and human rights groups have said President Abdullah Yameen's government failed to follow due process and that the case against Nasheed was politically motivated. Clooney, who is married to actor George Clooney, travelled with fellow international lawyer Jared Genser to a prison on Maafushi Island where Nasheed was taken on Aug. 23 from house arrest. Her and Genser's identifies were checked by two prison officials before the 90-minute discussion with Nasheed. "Well, President Nasheed is in a remarkably good spirits," Clooney said soon after the meeting. "He wanted me to convey to the people of the Maldives that they should remain hopeful that things will improve and that he is pleased that I will be attending meetings with him on behalf of the government." The meeting came a day before a High Court hearing on an appeal by the Prosecutor General's office, which had found some procedural irregularities, to review Nasheed's legal case. Prosecutor General Muhthaz Muhusin told Reuters that a High Court decision to review the case would help Nasheed to appeal against his sentence. UN rights chief Zeid Ra'ad Al-Hussein last week called on Yameen's government to release Nasheed. He also called for a review of criminal cases against several hundred of Nasheed's party supporters who have been arrested in protests since May in the Maldives.
#Maldives #Amal Clooney #Nasheed #International human rights
You May Also like: