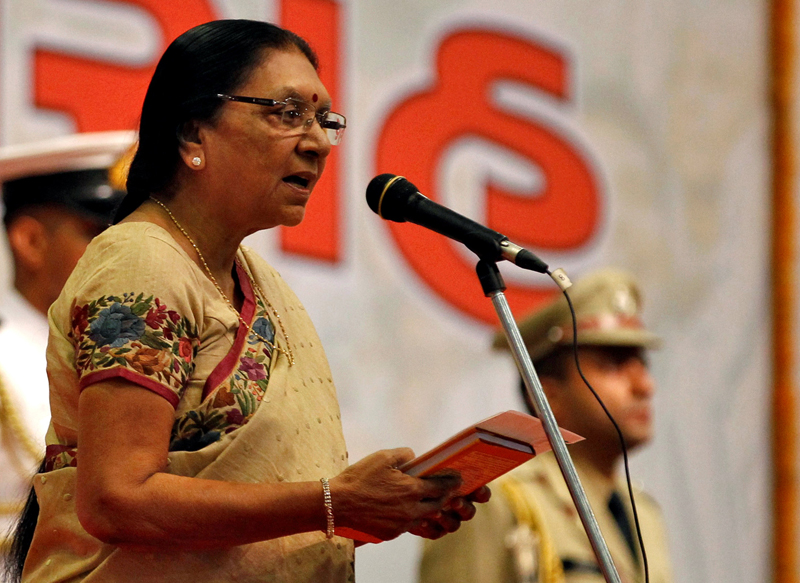 Anandiben Patel, the newly appointed chief minister of the western Indian state of Gujarat, takes her oath during a swearing-in ceremony at Gandhinagar in Gujarat, India, May 22, 2014. Photo: Reuters
New Delhi, August 1 The chief minister of the western Indian state of Gujarat and a long-time confidante of Prime Minister Narendra Modi resigned today, as protests by the low-caste Dalit community threatened to hurt the standing of the ruling party. Anandiben Patel, who served as the state’s first woman chief minister, posted the resignation letter on her Facebook page. She said the decision was driven by the fact that she was almost 75 years old, the age at which Modi expects ministers to retire. Modi appointed Patel as his successor in Gujarat, his home state, in 2014. He had run the state for 13 years — an era of rapid industrial growth that his Bharatiya Janata Party successfully pitched to voters as a “model” to bring prosperity to India’s 1.3 billion people. But Patel’s standing weakened after a series of caste-driven protests, which could be politically damaging for Modi. They have also disrupted parliamentary proceedings and may affect state elections in Gujarat and the northern state of Uttar Pradesh in 2017. About 25,000 member of Dalit community have staged protests since four young Dalit men were stripped and beaten in public after they were seen skinning a cow. The youths said the cow was dead. Killing of cows is banned in Gujarat .
#Narendra Modi #Gujarat #Dalit community #Anandiben Patel
You May Also like: